Start your sports morning off with sports news straight from the locker room!

Until 2010, Brian Finneran served as a wide receiver for the Atlanta Falcons in the National Football League.

Finneran entered the NFL in 1998 when he signed as a rookie free agent with the Seattle Seahawks. He came to the Falcons late in the 1999 season and has played with the team since.

In the 2010 season with the Falcons, Finneran played in all 16 regular-season games, but did not see the same receiving numbers as in his earlier seasons. He finished the year with 19 catches for 166 yards and three touchdowns. That was enough to help the Falcons finish the year with a 13-3 record and top the National Football Conference going into the 2010-11 NFL Playoffs.

Brian Joseph Finneran was born on January 31, 1976, in Mission Viejo, California. After high school, he played college football with the Villanova Wildcats. Finneran left the school holding school records at 265 receptions for 3,872 yards and 34 touchdowns. His senior year was his statistically best, including catching 96 passes for 1,389 yards and 19 touchdowns and winning the Walter Payton Award as the top offensive player in Division I-AA football. Finneran also had his jersey, number 25, retired by the school.

Off the field, Finneran is active with SafeKids, an organization that promotes helmet safety, with the “Bee a Buckler” Safety Program, which promotes seat belt use, as well as being an ambassador for USA Football and Heads Up Football. He resides with his wife, Erin, and four children, Conor, Brynn, Keenan and Cullen.

15 year sports personality in a Top 8 market. As a radio personality he has hosted several sports talk shows ranging from small market focus (high school football) to nationally recognized organizations (Atlanta Falcons). As a voice talent, John Michaels has functioned as spokespersons for MDrive, 5 Hour Energy, Buffalo Wild Wings, TNT, Ackerman Security and Equifax. His easy to approach personality and his ability to improvise has made John Michaels a favorite for hosting live events. The Atlanta Hawks, The Georgia Swarm and The Georgia Lottery are but a few of the many companies that have contracted John for promotional events. He has also spent 8 years as the Sideline Reporter for the Atlanta Falcons Radio Network, also functioning as a pregame and postgame host.

With a passion for sports and years of experience, “Hometeam” Brandon Leak has become a staple in Atlanta sports media. Serving the Atlanta sports community more than a decade, Leak is recognizable with one of the most distinct voices in sports talk radio.

Leak is also a member of the Atlanta Hawks’ in-house media team and Hosts a Hawks basketball show – Comcast’s Hawks Talk, and is a web correspondent and contributor for Hawks.com – highlighting the NBA’s Atlanta Hawks. Additionally Leak covers the Atlanta Falcons for 680 The Fan, providing analysis and weekly interviews for listeners. Leak has also served as the hosts of Comcast’s TV show The Falcons Report.

He has also served as an emcee, master of ceremonies and moderator for numerous fundraisers, banquets and social forums. With a passion for education, Leak seizes every opportunity to speak to students, providing academic encouragement and insight to those young minds with media aspirations.

A native of Decatur, GA, Leak is a devoted Atlanta sports fan who lives by the motto, “if you stay ready, you do not have to get ready.” Leak continues to work hard, making a name for himself and putting his mark on his hometown. A likeable guy with a friendly disposition, Leak has definitely become a hometown favorite.

Leak is a graduate of Dunwoody High School and attended Morehouse College, majoring in English with a minor in journalism. He resides in Smyrna with his wife, Trayce, and two dogs, Max and Murphy.

Joseph Fitzgerald Hamilton is a former American college and professional football player who was a quarterback in three different professional leagues. He played college football for the Georgia Institute of Technology, earned All-American recognition and won several national awards. After his playing career ended, Hamilton became an administrator and coach. He has served as the running backs coach for Georgia State University and then worked in the recruiting department for his alma mater, Georgia Tech.

After a storied high school career and fielding many offers, Hamilton accepted an athletic scholarship choosing to attend Georgia Tech, where he played for the Yellow Jackets football team from 1996 to 1999. He set Atlantic Coast Conference (ACC) career records for total offense (10,640 yards), touchdown passes (65) and total touchdowns (83). As a senior in 1999, he was recognized as a consensus first-team All-American, won the Davey O’ Brien Award, and was a finalist for the Heisman Trophy, finishing as the runner-up in the Heisman voting behind Wisconsin running back Ron Dayne. In 2002, he was named as one of the fifty members of the ACC 50th Anniversary Football Team. Hamilton was very proud to be elected to the College Football Hall of Fame 2014. 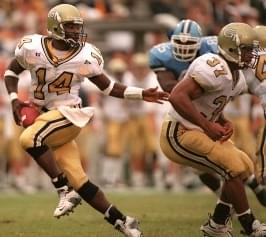 His current passion project is training and coaching young QBs through various platforms and is excited to start his broadcasting career here at Dickey Broadcasting Company and The Fan Family of Stations.

Mason attended Lassiter High School in Marietta. As a senior, he threw for a Georgia high school record 4,560 yards and 54 touchdowns and was the state’s Gatorade Football Player of the Year. In his two years as starter he threw for 8,265 yards and 85 touchdowns.

As a true freshman at the University of Georgia in 2010, Mason played in four games as a backup quarterback to Aaron Murray. He passed for 102 yards and had one touchdown. As a sophomore in 2011, he again was the backup to Murray, passing for 254 yards and two touchdowns. In 2012, he redshirted so that he could have another year of eligibility. Mason returned in 2013 as the backup to Murray. After Murray tore his ACL, Mason took over as Georgia’s starting quarterback and made his first career start in a win over rival Georgia Tech. He finished the game 22 of 36 for 299 yards and two touchdowns. Mason also started the 2014 Gator Bowl, passing for 320 yards with one touchdown. Overall, he appeared in five games, going 67 of 110 for 968 yards, five touchdowns and three interceptions. In 2014, he took over as Georgia’s starting quarterback after Murray graduated. He started all 13 games, completing 188 of 277 for 2,167 yards, 21 touchdowns, and four interceptions. Hutson singed with the Washington Redskins after his collegiate career and then played two years in the CFL with the Saskatchewan Rough Riders and the Calgary Stampeders. 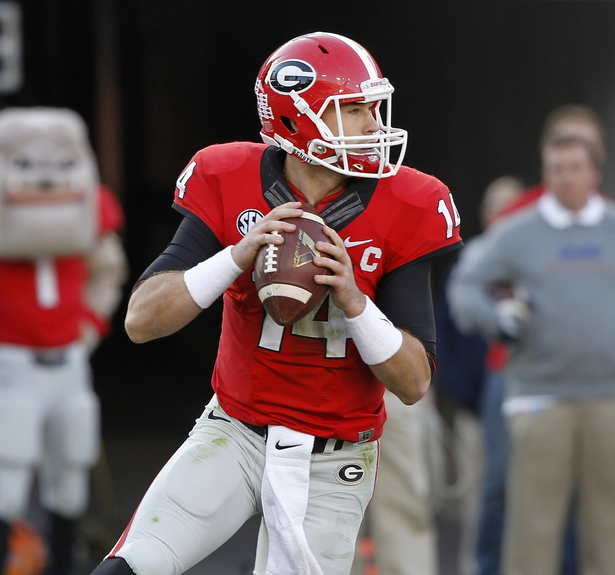 Transitioning into life after football, Hutson is now calling college football games with ESPN 3 and spending time with his passion as the Founder of “The Huddle,” a support group for men in the Atlanta area, who are foster or adopting fathers. Hutson himself grew up in a foster care home as a birth child. Hutson, his wife Catherine and their beagle, Denver live in Dunwoody, Georgia. He loves being outdoors, hunting and working at 680 The Fan!