The “King of College Football” Chuck Oliver and Matt “Lanta” Chernoff take you around the World of Sports and Entertainment exclusively on The Fan, 680 and 93.7FM and 680thefan.com!

Chuck Oliver is one of the toughest things to find in this city — a born-and-raised, true Atlanta native. After graduating from Central Gwinnett in 1986, Chuck then attended Auburn University, where he earned his degree in English and began teaching and coaching football.

In 1992 Chuck was hired at South Gwinnett as defensive line coach. During his five-year tenure at South nine different linemen received scholarships, playing everywhere from Auburn to Georgia Southern, from Georgia Tech to Eastern Kentucky. At the age of 29, he “retired” to become a full-time writer and author, penning three books and literally hundreds of magazine and newspaper articles and feature pieces.

In August 2000, AM 790 in Atlanta set about to find the city’s most knowledgeable college football authority and out of hundreds of applicants . . . they selected Chuck. It wasn’t long before the Saturday college football show became Saturdays and Sundays, then a Monday through Friday show during mid-days and finally afternoon drive talking college football in the nation’s 7th largest market.

After anchoring that show, Chuck was offered the chance in 2008 to join 680 The Fan and didn’t hesitate. He and Matt Chernoff now have the most fact-filled, most fun and definitely most quirky four hours on Atlanta sports radio every Monday through Friday from 3pm – 7pm.

Additionally, Chuck was Comcast Sport Southeast’s ACC football expert for 10 seasons, as well as providing color commentary for seven years for the Conference USA “Game of the Week” televised across 11 states each Saturday during football season. He also spent four years as the SEC expert on the post-game show for CBS’ national game of the week, while also providing color analysis on the official radio broadcast for eight Chick-fil-A Peach Bowls. Additionally, Chuck logged 13 years on the selection committee for the bowl game and is also a voting member for the College Football Hall of Fame. Not forgetting his high school coaching roots, Chuck spent five years co-hosting the CSS production “In the Huddle,” a weekly high school football show seen from Louisiana to Mobile and Miami up to North Carolina. He has been nominated for four Emmys.

Chuck currently lives in Sandy Springs with his wife Kristen and, occasionally, Tiger the neighborhood cat who visits just to get fed.

Matt hosts afternoon drive from 3-7 weekdays on (WCNN) 680 The Fan and has been the voice of Atlanta Sports Radio for more than 20 years. 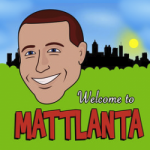 Matt also hosts the “Welcome To Mattlanta” podcast that features sports and entertainment guests with great stories to share about to their life and career in Atlanta. 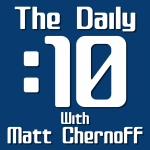 Matt also hosts “The Daily 10 Podcast” which drops weekdays at 10am giving sports fans a chance to hear the biggest stories of the day on demand.

Both Podcasts can be found at www.thepodcastpark.com

You can also see Matt on Fox 5 Atlanta every Thursday night during the football season co-hosting the Thursday Night Kickoff show and the Falcons 5th Quarter Show on Sunday afternoon.

Matt has a crowded house with three very active kids and two very needy cats who act like dogs.  Jake – 14 years old,  Zoe – 10 years old, and Josh – 8 years old.  And of course….Bruno and Izzy are the needy cats.

Matt grew up in Dunwoody, Ga and has lived in Woodstock, Ga since 2006.

Matt and his family have mastered the art of vacationing. From beach trips and theme parks to cruising and camping, we love it ALL!