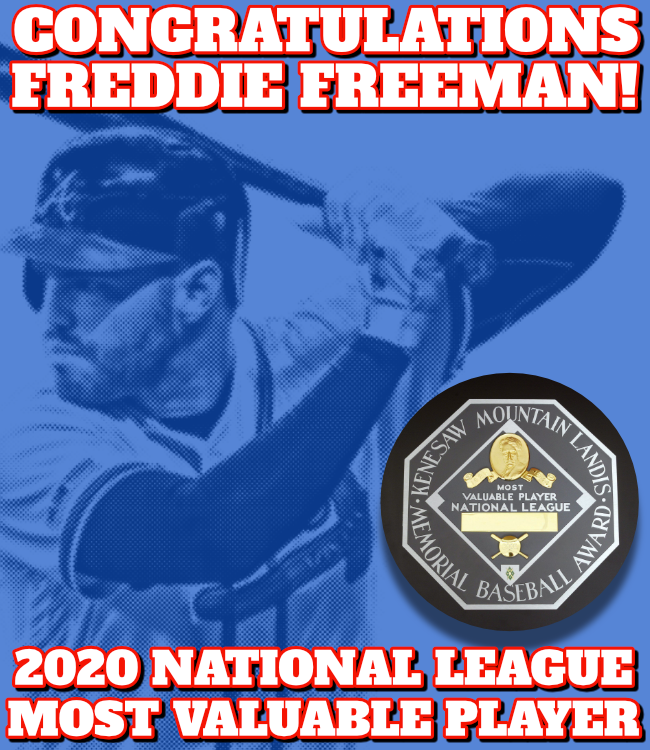 BY KEVIN MCALPIN
680 THE FAN, ATLANTA – As the 2020 BBWAA awards week came to a close, it did so with a bang for Freddie Freeman, who was named as the National League’s Most Valuable Player. In his 11th Big League season, Freeman led the National League in doubles (23), Runs (51), Extra-Base Hits (37) and fWAR (3.3) while he finished second in the League in Batting Average (.341), OBP (.462), SLG (.640), OPS (1.102), RBI (53) and Total Bases (137). Prior to this season, Freeman appeared in the Top 10 in MVP voting four times, with a fourth place finish in 2018 previously serving as the closest he finished to the accolade. In taking home the award, Freeman becomes the first Brave since Chipper Jones in 1999 to be named MVP of the National League.

The numbers that Freeman put up would be impressive in normal circumstances, but taking into consideration how sick he got with COVID in July, missing the majority of Summer Camp, it makes what he accomplished during this shortened season even more eye-popping! While we are accustomed to seeing Freeman hit third for the Braves, Brian Snitker bumped him up one spot in the order, and it seemed to not only have a positive impact on Freddie, but also for Marcell Ozuna and Travis d’Arnaud, who moved into the third and fourth spots respectively. In 32 games batting third, Freeman still put up really good numbers, hitting .295 with a .982 OPS and six homers and 26 RBI to go along with 11 doubles. However, when he moved up one slot in the order, Freeman hit .390 with a 1.202 OPS and had the benefit of hitting between a pair of fellow Silver Sluggers in Ronald Acuna Jr and Marcell Ozuna.

While it seemed all but inevitable that Freeman would take home the MVP, he had some stiff competition in both Mookie Betts and Manny Machado. Fernando Tatis Jr. also was right in the mix until the final couple weeks of the season when his numbers dipped off down the stretch. Tonight, Freddie joins a pretty exclusive group of Braves players to take home the MVP, joining Chipper Jones (1999), Terry Pendleton (1991), Dale Murphy (1982 & 1983), Hank Aaron (1957), Robert Elliott (1947) and John Evers (1914).

Now that Freddie has garnered the notoriety of being an MVP, the next order of business for both Freeman and the Braves would be knocking out a longterm extension before the start of Spring Training. As I’ve said on a number of occasions on the air, the last thing either side would want to have to worry about is dealing with going into a lame duck status in the final year of team control. I’d expect the 31 year old to get a five or six year deal, that would get him even closer to his goal of spending his entire career in a Braves uniform, like his buddy and mentor Chipper Jones.