By Heather Dinich
ESPN Senior Writer – In order to kick off the college football season on time, coaches throughout the country could begin working with their players again as soon as July 6, and required meetings and walk-throughs could start in mid-July if a proposed six-week practice plan is approved by the NCAA later this month.

The NCAA Division I Football Oversight Committee will finalize a draft of the long-awaited plan Thursday, but it has to be approved by the NCAA Division I council at its next meeting on June 17. The color-coded draft, obtained by ESPN on Monday, was circulated throughout conferences so schools could solicit feedback.

Todd Berry, the executive director of the American Football Coaches Association, was on last week’s Football Oversight teleconference and said most of the coaches he has talked to support the plan, which includes a new two-week period for coach-supervised walk-throughs and meetings.

“There has been a lot of trying to find compromises to try to make it as equitable as possible, but equity is very hard to find, so you’re looking more for fairness than anything else,” Berry said. “… I talked with a lot of our coaches, and the majority of our coaches, more than anything else they just want to know what they can do. Right now that’s more important than this team getting a little more than what I’m getting.”

The beginning of coaching interaction would depend on the date of the first game. Some programs kick off the season on Aug. 29, or Week 0, which moves the three phases of proposed activities — required workouts, enhanced training and preseason camp — up a week. For teams that begin the season on Labor Day weekend, the required workouts would begin on July 13, followed by an enhanced training that begins on July 24, and a normal preseason camp start date of Aug. 7.

The switch from voluntary workouts, which have had staggered starts across the country this month, to required participation in “summer access” is a normal transition in the sport’s calendar, but the recommendation of an additional two weeks specifically for coach-supervised walk-throughs and meetings was added with the hope of giving coaches extra time to evaluate players’ conditioning and playbook knowledge. Players aren’t allowed to wear helmets or pads during walk-throughs. According to the plan, they can use footballs, but it will be different than NFL OTAs, Berry said.

“This was a way for us to spend more time evaluating their conditioning, which has some relevance here,” Berry said. “… and then a little bit of football, to get them excited about it, get them back in the groove of walk-throughs — not OTAs where you’re running around, but just getting back into understanding the plays.”

Under that proposal, the athletes can have up to 20 hours of “countable athletically related activities,” including weight training, conditioning, film review, walk-throughs and meetings.

“We’re approaching it the right way and being thoughtful about making it safe for student-athletes,” Texas A&M athletic director Ross Bjork told ESPN. “I think that’s the key, to having the ability to have some enhanced access because everything has been condensed and shortened in the spring. I think this is the right way to do it.”

A normal, four-week preseason camp would begin after the additional two weeks of enhanced training. As players across the country have begun to return to campuses for voluntary workouts, there have already been some positive tests reported, but athletic officials are continuing to plan for an on-time start to the season in spite of some looming uncertainty.

“Until something happens that keeps us from seeing that as a reality, that continues to be the goal for the short term,” Big 12 commissioner Bob Bowlsby told ESPN. “I think we’ll get to that section in the middle of July and we’ll either be in good shape and we can move forward or we won’t.”

West Virginia athletic director Shane Lyons, who is chair of the football oversight committee, told ESPN’s Andrea Adelson that there is one area that might change between the proposed calendar and what gets approved on Thursday, and that is shortening the window between the start of required workouts on July 13 and the start of enhanced training on July 24.

“Some people are thinking the summer access is too long,” Lyons said, based on feedback the committee has already received. “There’s a concern by making that part a requirement, it extends it to too long a period and whether that should be adjusted to make it shorter. Instead of starting on the 13th, start on the 20th. I haven’t heard of all the concerns, and that’s why it was put out to the conferences, to start getting more input.”

Lyons said the reason the committee decided on a longer window between voluntary workouts and the start of enhanced training on July 24 was that they preferred a slower ramp up.

“That was the rationale instead of just going from voluntary to 20 hours, is there a better approach to ramping up the hours from a requirement standpoint,” he said.

Lyons also added that even though some coaches wanted to try and get in extra time to make up for lost spring practices, that simply was not feasible considering the time constraints.

The return plan is the only thing on the agenda for the committee on Thursday. Lyons wants to come to a consensus then before sending it on to the NCAA Division I Council for approval.

“I want it to be as buttoned up as possible where we all agree on it, and not get it to the floor of the council and it starting to be torn apart,” Lyons said. “I’d like to present it, and I’d like it to be more or less rubber stamped as opposed to the debate starting on the council floor.

“This is all a compromise. With a proposal there’s some that want earlier, some that want later. What can we all agree upon is going to work on this model. I don’t think there’s going to be a perfect model by any means that everybody totally agrees upon, but what can we do that’s in the best interest of our student-athletes to be prepared come Sept. 5 or whenever their kickoff is from a health and safety standpoint as we move forward. … That’s the goal and objective, to have something on Thursday.”

Bowlsby, who is a member of the College Football Playoff management committee, said it’s still too early to make any decisions as to what might be required this year for the CFP or bowl eligibility.

“I think you play as many games as you can possibly play and you make an assessment halfway through the season or something after you’ve had a chance to see what people’s experiences are,” he said. “I think everybody’s experience is going to be different. It’s going to be localized, and some people will blaze right through 12 games and others will struggle off and on.”

Bowlsby said there’s also still the chance the season could be extended or shortened, depending on which direction the pandemic goes.

“We’re just going to have to see how the season unfolds,” he said, “and then deal with it.”

The Plan is as follows: 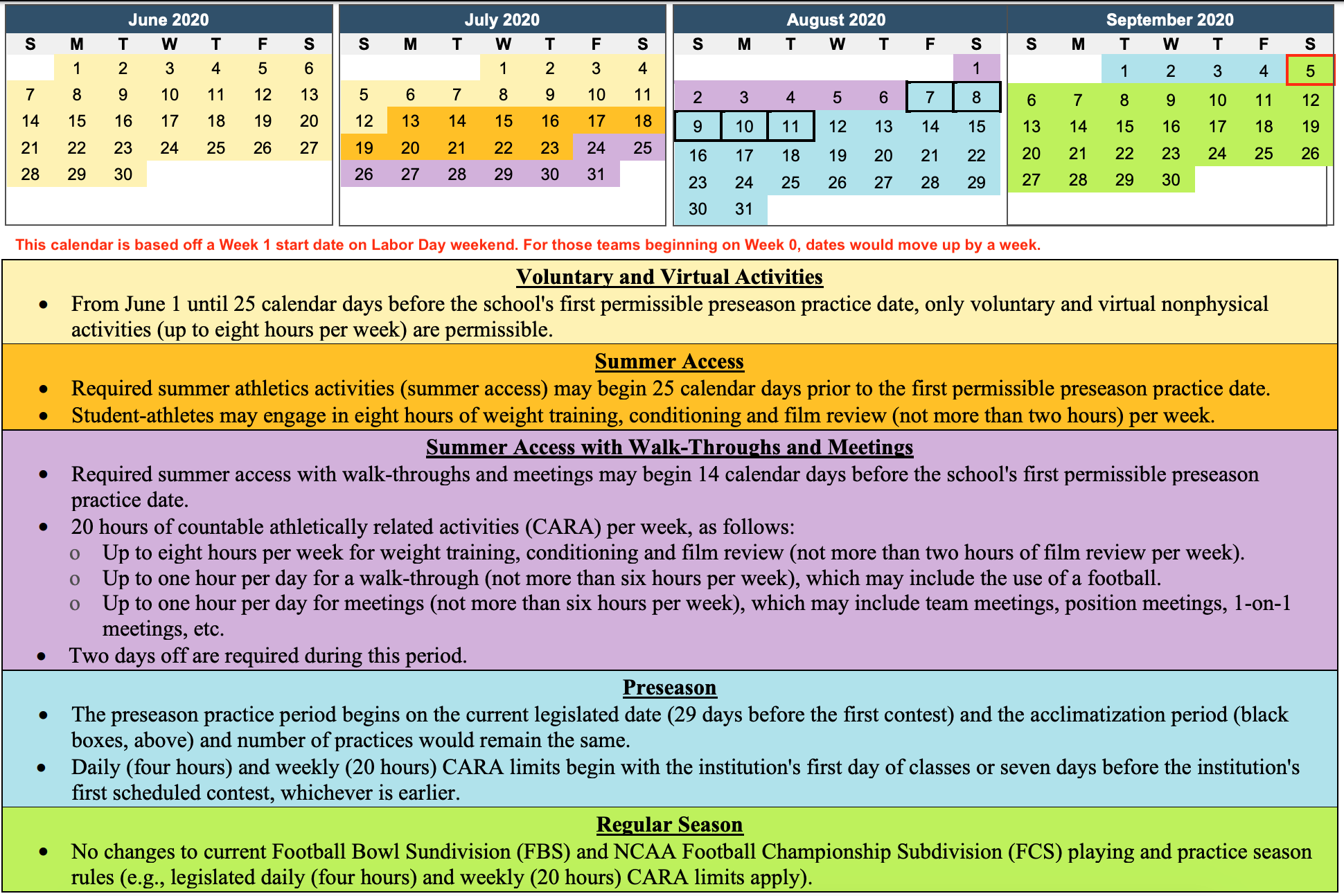