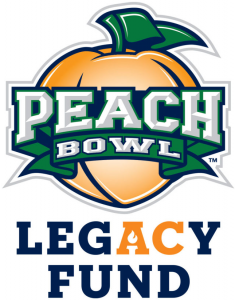 The Peach Bowl, Inc. has joined the fight against childhood cancer by donating $20 million to the Aflac Cancer and Blood Disorders Center of Children’s Healthcare of Atlanta to establish the Peach Bowl LegACy Fund, which was created in memory of Anna Charles “AC” Hollis to help find a cure for childhood cancer.

AC, a Children’s patient and daughter of long-time Peach Bowl Vice President of Sales Benji Hollis, was diagnosed with an aggressive form of leukemia in April 2018. She lost her battle in September 2018, just five short months later. AC’s fight has now become the Peach Bowl’s fight.

Over the next five years, the Peach Bowl LegACy Fund will help advance several new drugs and treatments until a breakthrough is made. Further, the Peach Bowl will establish ongoing revenue streams, in addition to the $20 million gift to keep funds coming in for the fight against childhood cancer.

Peach Bowl Touchdowns for Children’s (T4C) is another effort supported through this funding program. College football fans can pledge $1 or more for every touchdown scored by their favorite team during the 12-game regular season. All proceeds will be matched by the Peach Bowl and support the innovative research in the Peach Bowl LegACy Fund.

Learn more about this historic donation.