ATLANTA (AP) — Braves manager Brian Snitker gave most of his everyday players some time off a day after Atlanta clinched the NL East. 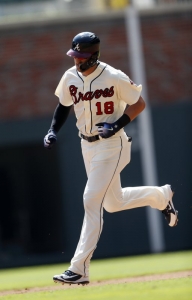 “You see the fun the starters have day in and day out,” Adams said. “When I saw my name in the lineup I just wanted to go out, have fun, enjoy it and take it in because this is a special group, a special crowd and a special time for this organization.”

Adams homered and drove in two runs, Anibal Sanchez won for the first time in nine starts and the Atlanta Braves used a lineup of reserves to win their fifth straight game, 2-1 over the Philadelphia Phillies on Sunday.

The loss dropped Philadelphia from postseason contention. Atlanta, the first NL team to qualify for the playoffs, eliminated the Phillies from the division race on Saturday. The Braves have the second-best record among NL division leaders at 88-68 and could earn home-field advantage in the NL Division Series with a strong performance during the final week of the regular season.

The Braves mostly rested their regulars against ace Aaron Nola (16-6). Freddie Freeman and Nick Markakis each had one at-bat in Atlanta’s final home game before walking off the field to standing ovations before the start of the second.

“Everybody deserved it, but they’re the two guys that have posted up every day,” Snitker said. “They’re on a 162-game pace and kind of our guts. So I thought that was pretty cool they got to get recognized. It was very well deserved.”

Adams, filling in for center fielder Ender Inciarte, had an RBI double in the second and hit his second homer in the fifth.

Sanchez (7-6) further secured his role as Atlanta’s No. 3 starter for the division series behind Mike Foltynewicz and Kevin Gausman, allowing four hits, one run and one walk in five innings. Sanchez won for the first time since Aug. 3 and has a 3.09 ERA over that span.

“He’s been huge,” Snitker said. “What a great story that is. As far as being a complete pitcher and executing pitches, it’s pretty good. There’s a lot of knowledge there. He’s been doing it a long time and he’s been successful.”

Scott Kingery’s eighth homer for Philadelphia tied it at 1-all in the third. The Phillies were swept in a four-game series in Atlanta for the first time since 1997.

Nola gave up four hits, two runs and one walk with six strikeouts in six innings. He has surrendered nine homers in five starts this month and is 1-3 with a 4.55 ERA over that span.

Nola wants to make one final start, giving him 33 for the season, as Philadelphia tries to finish above .500.

“I think just going forward, everybody has confidence in each other,” he said. “To finish the year out strong is important to us.”

Reliever Max Fried allowed three baseunners in the sixth and seventh for Atlanta. Sam Freeman faced the minimum in the eighth.

Shane Carle pitched a shaky ninth to earn his first career save in two chances. He walked two batters and hit Kingery with a pitch before Wilson Ramos grounded out to end it.

Phillies manager Gabe Kapler said the team is committed to playing young talent like Kingery, J.P. Crawford, Odubel Herrera and Aaron Altherr in the final week. Veterans like Asdrubal Cabrera and Ramos who were acquired for the playoff run will be used in reserve roles. Kapler added that catcher Jorge Alfaro will play every day if his mild right quadriceps strain isn’t a bother.

Nola has fallen off in September, but he’s still having a career-best season. He avoided injuries to surpass 200 innings for the first time and ranks second in the NL with a 2.45 ERA.

Atlanta has been waiting for Adam Duvall, who went 1-for-3 Sunday, to seize the role as the team’s primary source of right-handed power off the bench. But he’s been a bust, hitting .104 with no RBIs in 31 games, a span 48 at-bats, since coming over in a trade with Cincinnati.

Sanchez got his first hit since April 9, 2014, a span of 54 at-bats, with a single in the third. He crossed first base with his arms in the air as the Braves’ dugout celebrated.

Phillies RHP Zach Eflin (11-7, 4.09 ERA) will try to win his third straight start as Philadelphia opens a four-game series Monday at Colorado. The Braves are off Monday and begin a three-game series Tuesday at the New York Mets with RHP Touki Toussaint (2-1, 4.30 ERA) on the mound.