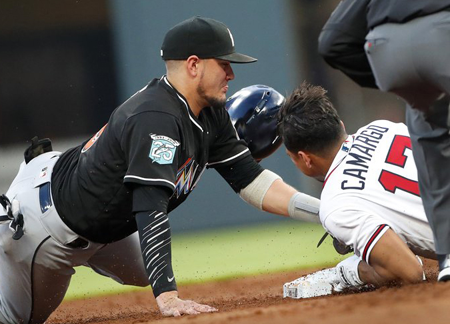 Those hopes were dashed when Straily strained his right forearm and was sidelined until April 30. But after two rough starts, Straily has settled down to win two straight and remind Mattingly that he can still help the rebuilding Marlins.

“That’s nice to see for us and I’m thinking for his confidence as well,” Mattingly said. “Obviously it didn’t go well in spring, but he’s bounced back and he’s throwing the ball good for us.”

Straily (2-0) allowed three hits, walked three and struck out six to shut down the NL’s top-scoring offense. He also beat Atlanta in his previous start a week prior.

Miami got both its runs in the sixth. Martin Prado singled and scored on Realmuto’s triple, and Starlin Castro chased Matt Wisler (1-1) with a double.

The Braves, who began the game with the NL’s best record, lost for the third time in 10 games. They were shut out for the second time this season and the first since Washington’s Max Scherzer blanked them on April 9.

Wisler, making a spot start after getting recalled from Triple-A Gwinnett when Thursday’s game against the Chicago Cubs was rained out, gave up two runs on six hits in 5 1/3 innings. He walked two and struck out five.

Straily’s best work came in the fourth. Freddie Freeman walked and advanced to third on Nick Markakis’ double. Straily intentionally walked Ender Inciarte to load the bases, and then escaped the jam by striking out Jose Bautista and getting Johan Camargo to fly out.

“It’s tough,” said Markakis, who had three of the Braves’ four hits. “You’ve got bases loaded, one out, and you’ve got your guys up there that want to be in that situation. Their pitcher did a better job of getting out of jams like that.”

In seven previous career starts against Atlanta, Straily had pitched into the seventh just once.

“It’s the process of staying committed to the game plan and trying to fill up the strike zone,” Straily said. “Tonight was honestly just a good example of following J.T.’s fingers and some really good plays behind me.”

Kyle Barraclough worked the eighth and Brad Ziegler induced a double-play grounder from Tyler Flowers to retire the side in the ninth and earn his eighth save in eight chances. The Braves came in having scored an NL-best 76 runs in the seventh inning or later.

The only Atlanta player other than Markakis to get a hit was Johan Camargo, who singled in the second but was thrown out trying to stretch it into a double.

Braves: SS Dansby Swanson will likely return to the lineup on Saturday. The No. 1 overall draft pick of 2015 has been on the DL and missed 13 games since May 4 with left wrist inflammation.

The Marlins recalled LHPs Adam Conley and Dillon Peters to pitch out of the bullpen a day after designating RHP Junichi Tazawa for assignment and optioning RHP Tyler Cloyd to Triple-A New Orleans. Conley and Peters have spent most of their careers as starters. “The number of guys we have that we’re going to control innings — you’ll probably see a little bit of a revolving door through the course of the season,” Mattingly said.

Braves: LHP Sean Newcomb (4-1, 2.51 ERA) has pitched 20 consecutive scoreless innings as he attempts to win a second straight start against Miami. In three career starts in the series, Newcomb is 1-1 with a 3.18 ERA.