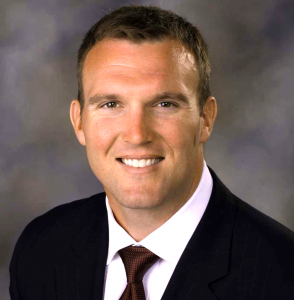 Stinchcomb becomes the 14th former Bulldog player to be inducted into the Hall of Fame and the 18th selection overall including former coaches.  He will be officially inducted on Dec. 4, 2018, at the annual NFF awards dinner at the Hilton Midtown Hotel in New York City.

A Lilburn native, Stinchcomb may be the most honored offensive football student-athlete ever to wear the red and black achieving the ultimate in balance between academics, athletics, and community service.  He is a former recipient of the NFF Draddy Award (currently named the Campbell Trophy) which is often referred to as the “Academic Heisman.”  Named in honor of William V. Campbell, the former chairman of Intuit, former player and head coach at Columbia, the trophy has become the most prestigious and desirable “academic” award in college football. The trophy recognizes an individual as the absolute best in the country for his academic success, football performance and exemplary community leadership.

As a three-year starter at offensive tackle, Stinchcomb anchored an offensive line in 1997 that paved way for 432 yards per game of offense and 6.3 yards per play—third best average in school history.  Pass protecting for quarterback Mike Bobo and run blocking for tailback Robert Edwards, he helped lead the ‘Dogs to a 10-2 season and Outback Bowl victory over Wisconsin.

Stinchcomb was a consensus All-America first team selection in both 1997 and 1998 including those teams chosen by the Associated Press, American Football Coaches Association, and Walter Camp.  He was the recipient of the 1998 Jacobs Blocking Trophy which goes annually to the top blocker in the SEC and was also a finalist for the Lombardi Award which goes annually to the nation’s top lineman. 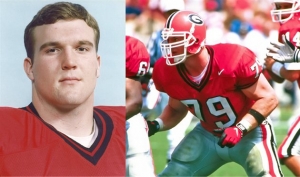 schools across the country.  He also received the Woody Hayes National Scholar-Athlete of the Year Award.

Community service was also one of his passions and during his college career he participated in numerous programs including Habitat for Humanity, Clarke County Mentor Program, Athens Homeless Shelter, Thanksgiving Food Bank, and served as keynote speaker for the Northeast Georgia Eagle Scout Banquet.  For his efforts, he was recognized as one of 11 football student-athletes across the country for selection to the American Football Coaches Good Works Team in both 1997 and ’98.

Stinchcomb is the president and founder of the Stinchcomb Family Foundation, a private, nonprofit organization that supports public children’s charities. Together with his brother Jon, a former Georgia football star and former New Orleans Saints NFL lineman, and former Georgia quarterback David Greene, Stinchcomb hosted “Countdown to Kickoff,” an annual children’s charity event held several  years at UGA. It provided an opportunity each July for fans to come out and mingle with former and current Georgia players with proceeds benefiting Children’s Healthcare of Atlanta, the Georgia Transplant Foundation, Children’s Tumor Foundation, and the University of Georgia College of Education and UGA’s own Pediatric Exercise and Motor Development Clinic.

At the conclusion of his college career, Stinchcomb was awarded post-graduate scholarships by both the NCAA and National Football Foundation.  He also received the NCAA Top Eight Award which annually recognizes the nation’s top eight student-athletes regardless of sport.  In 1999 he was an NFL first round draft choice of the Oakland Raiders where he played for four years including the 2003 Raider Super Bowl team.  He spent the 2004 and ’05 seasons with the Tampa Bay Buccaneers.  He was named a member of the SEC Team of the Decade for the 1990’s.

In 2009, Stinchcomb was inducted into the UGA Circle of Honor, the highest honor a former student-athlete or coach can achieve.  In 2012, he was named recipient of the UGA Terry College of Business Outstanding Young Alumni Award.

He currently resides in Atlanta where he is a partner with SterlingSeacrest Partners, an insurance and risk management company, and also works as a television football game analyst with the SEC Network and ESPN.