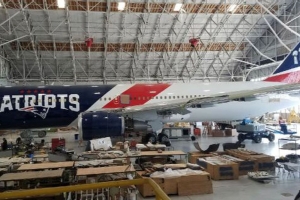 The New England Patriots set a new bar for NFL luxury when they became the team to first purchase their own airplane.

According to ESPN’s Darren Rovell, the Patriots not only bought one, but two Boeing 767 airplanes complete with the team’s red, white and blue logo. The planes reportedly come equipped with first-class seating throughout. Even better, some of the seats completely recline.

Insert picture of quarterback Tom Brady snoozing away in his custom Under Armor PJs.

Per the report, the Patriots bought extended-range planes that can fly up to 12 hours nonstop. The plan is that one plane will be the primary one used for transportation to and from game locations. The other is considered the backup, according to the report.

The increasing cost of charter traveling and limitations by major airlines likely had a lot to do with the Patriots’ decision in taking traveling matters into their own hands.

According to the report, the Patriots plan to rent out the planes when they are not in use during the regular season.

TMZ - Colin Kaepernick Did NOT Turn Down NFL Contract

Colin Kaepernick‘s camp is adamantly denying he turned down an NFL contract in order to “play up the race card” … calling the report a “bold faced lie.”

Multiple people in the QB’s inner circle say there’s absolutely zero truth to a Daily Caller report that Kaep shot down an offer from an unnamed NFL team in order to stir up “a media frenzy that eventually leads to a more lucrative deal.”

As one well-connected Kapernick source tells TMZ Sports, “Colin NEVER had any talks about any contract or any money” with any NFL team.

Several teams have reportedly considered making an offer to Kaep — including the Ravens and the Dolphins — but as of yet, no one has pulled the trigger.

Spike Lee is clearly fed up that Colin Kaepernick is unemployed — and now he’s going to bat for the QB.

The legendary director of movies like “Do the Right Thing,” “Jungle Fever” and “Malcolm X” is promoting an event called, “United We Stand. Rally for Colin Kaepernick.”

It’s all going down on Wednesday, August 23 in front of NFL Headquarters in NY. Multiple organizations are on board — including the Justice League NYC and the Empowerment Movement.

The Justice League is the same organization that made the “I Can’t Breathe” shirts that a bunch of athletes wore in the wake of the Eric Garner killing.

NBA is Changing Scheduling Rules to Avoid So Many Players Resting

The NBA has issued a memo to teams this week advising of scheduling changes to impact player participation, according to Brian Windhorst of ESPN.

The season has been extended for a week starting earlier in October, and several rules are being put in place to disincentivize the stars from resting so much. ESPN, which is reporting on this, is also in a position to be a beneficiary of changes, as a broadcast partner. Last year, there were several moments where ESPN on-air personalities complained about stars resting in primetime games.

We’ll see if these changes cause the star players to participate and not avoid certain primetime matchups during the lengthy regular season.

The only pair of Air Jordan 3’s ever made for Kobe Bryant has raked in an insane amount of cash on the auction block … selling for more than $30,000!!

Here’s why they’re so freakin’ expensive … the kicks were exclusively made for the Black Mamba when he was in between shoe deals back in 2002. According to Nice Kicks, he even tested them out in a couple games that season.

But Kobe never ended up signing with the Jumpman. So, as legend has it, this is one of the only pairs of Kobe Bryant Jordan 3s in existence.

Umpire Joe West has been suspended three games for telling USA Today that Adrian Beltre is the league’s biggest complainer.

West, who has worked the third-most games in league history including five World Series, made the comment in a wide-ranging interview that was published on June 20. In the piece, West gives his views on how the game has changed, the best pitchers and hitters he’s ever seen and much more.

When asked about who the biggest complainer he’s dealt with is, West said the following:

“It’s got to be Adrian Beltre. Every pitch you call that’s a strike, he says, “Whoa! Whoa! Whoa!’ I had a game with him recently and the pitch was right down the middle. He tells me, “that ball is outside.’

“I told him, ‘You may be a great ballplayer, but you’re the worst umpire in the league. You stink.’’

In the interview, West clarified that he and Beltre are on good terms, and Beltre later said he thought the suspension was unnecessary and that West told him he was joking.

It is unclear whether the league waited to enact the suspension or if it was given shortly after the interview and West was appealing until now.

“Joking interactions between umpires and players are a routine part of the game,” the World Umpires Association said in a statement. “We disagree strongly with the decision to punish Joe West simply for sharing a humorous exchange with a player.”

Disney stock was down about 4% in after-hours trading after the company announced that it missed revenue forecasts. A large part of the reason for that was their cable business, and a large portion of that is ESPN.

Cable Networks revenues for the quarter decreased 3% to $4.1 billion and operating income decreased 23% to $1.5 billion. Lower operating income was due to a decline at ESPN. The decrease at ESPN was due to higher programming costs, lower advertising revenue and severance and contract termination costs, partially offset by affiliate revenue growth.

Breaking this down bit by bit:

Much will be made of the announcements about an OTT streaming network and acquiring a majority stake in BAM Tech as mechanisms for mitigating further attrition in cable subscribers. It will be interesting to see how many people are willing to pay money to stream the niche sports.

David Letterman Will Return to TV in a New Netflix Series

David Letterman is preparing to return to television in his first continuing series since stepping down as the host of CBS’s “Late Show” in 2015.

Netflix announced on Tuesday that it had picked up a new show from Mr. Letterman, the comedian and broadcaster.

Each hourlong episode of the series, which will run for six episodes next year, will feature a long-form interview between Mr. Letterman and a guest, as well as segments in which he explores the wider world.

Mr. Letterman said on Tuesday in a phone interview that ever since he signed off from his “Late Show” duties, “Everybody would come to me and say, ‘What do you want to do?’ And I kept saying, ‘Well, jeez, I did what I wanted to do.’”

But his new series, which does not yet have a title, “feels like exactly what I want at this stage of my life,” he added.

As Mr. Letterman described it, his Netflix series would not much resemble his past network late-night shows.

His current stage of planning, Mr. Letterman said, was to “write down a list of people that you know you’re not going to be able to talk to, and those are the people that I want to try to get to talk to.”

He said he had already booked one such guest “that I’m delighted about, that I’m told I can’t reveal.”

Mr. Letterman was also adamant that he would keep his beard for the Netflix series.

“Between you and me, the beard is to cover up botched plastic surgery,” he said. “The beard has to stay. It would be hideous. Children would be frightened.GH