Cleveland and LeBron are BOTH down! 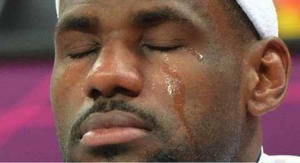 As of this writing, the Cleveland Cavaliers are down 0-3 to the Golden State Warriors. To say, “it doesn’t look good” would be an understatement. So, if the Cavs get swept, what will the conversation be? “LeBron is a bum?” “See, I told you, he shouldn’t even be in the same conversation with Michael?” “The Cavaliers are going to have to add another piece.” “Where will LeBron go next or will he try to lure Russell Westbrook to Cleveland?” Surely, Russell Westbrook can’t be content rotting in Oklahoma City watching Kevin Durant win a ring? I’m sure we’ll discuss these and many more scenarios during the off season.

Lebron James made some interesting comments this week. He talked about being physically and emotionally drained. How, if he was an owner, he would try to sign everybody. “Super teams are great for the game, look at the ratings.” “Battling dynasty teams is part of my calling.” Oh really, I love that one?! Lebron James is a giant killer. As if he’s Flash Gordon out to slay the ruthless tyrant Ming the Merciless. Let me be clear, I am not a Lebron hater. He’s the greatest player of our time. I like what he brings to the game, on and off the court. But like all great players, he will be replaced by the next greatest player… 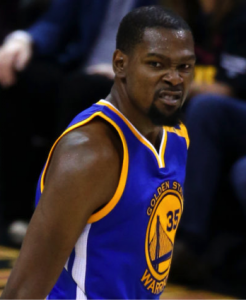 Who will be replaced by the next greatest player after that… 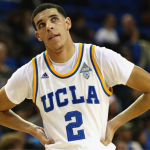 Ok, that might be a reach…But, so goes life in the NBA.

The question for me becomes how long do we have to wait? When do we get our shot at a Super Team in Atlanta? New Hawks GM Travis Schlenk says it took Golden State about 7 years to build a champion. C’mon folks, what’s 7 years? We’ve waited this long…?

At the very least, the lack of competitive games in the NBA post season this year has lead to some pretty funny memes. 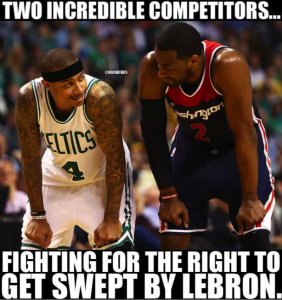 Maybe James Harden had the right idea? Bow out early! Why should I kill myself, only to be gobbled up by the Warriors? I’d rather save the wear and tear and play golf. There’s always next year. Unfortunately, the Warriors aren’t going anywhere…and neither are the Cavaliers. Barring injury to one or more key players (and nobody wants to wish that on anybody, wink wink), we do have a couple of choices as fans. We can wait for these two teams to grow “too old” and fade away or jump on the bandwagon! Sorry Hawks. 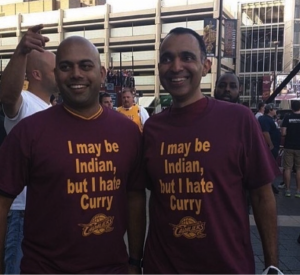