All is revealed in today’s Confidential!

Dont’a Hightower should set up a table in a high school gym with three hats, and call an assembly where he’ll dramatically pick one.

Actually, when he does it this time, he’ll be getting paid for real.

According to Ian Rapoport of the NFL Network, the free agent linebacker is expected to make his decision today after a quick tour.

He visited the Jets and the Steelers, but many still expect him to return home to the Patriots.

Former Georgia Tech coach Brian Gregory has accepted the head-coaching job at South Florida. Gregory takes on a daunting task to restore a team that went 1-17 in the American Athletic Conference this past season (8-25 overall) and is under NCAA investigation for possible academic fraud. The school made the announcement Tuesday afternoon.

The hiring was reported by CBS Sports writer Jon Rothstein Tuesday morning. Since his dismissal at Tech last April, Gregory has remained in Atlanta, but was working on a consultant basis at Michigan State, where he was a longtime assistant to coach Tom Izzo.

In five seasons at Tech, Gregory was 76-86 overall and 27-61 in the ACC. His best season was his last, when the Yellow Jackets were 21-15 overall and 8-10 in the ACC and reached the NIT quarterfinals.

Gregory replaces Orlando Antigua, who was fired in January. The NCAA’s investigation dates at least to last summer. He was 16-47 in 2 1/2 seasons. Rather coincidentally, Antigua was an assistant with Tech coach Josh Pastner for one season at Memphis before leaving for Kentucky with John Calipari, whose departure led to Pastner’s hire as head coach in 2010.

Further, Antigua replaced Stan Heath at USF. Heath’s firing led to his son Josh transferring to play for Gregory, who is close friends with Heath, having coached together at Michigan State.

The challenge Gregory takes on is considerable. The team’s leading scorer, Geno Thorpe, is leaving the team with a season of eligibility remaining, and a prominent backup also sought his release to transfer. The Tampa Bay Times reported that more transfers are expected.

Report: Julius Erving Signing On As Head Coach of A BIG 3 Team

Ice Cube’s BIG3 league continues to swell in terms of legitimate star power and talent, as NBA Hall of Famer Julius Erving has signed to be a head coach.

Erving, an NBA legend, is not only a man who brings a wealth of basketball knowledge to this fledgling league, but he also brings his own flavor of pure magic.

It’s unknown which of the eight teams Dr. J will coach. But we do know he’ll be joined by Allen Iverson, who will be coaching and playing for a team (which he named after a legendary 1980s sitcom).

The BIG3 league kicks off this summer at the Barclay’s Center on June 25th in New York City.

It’s being promoted as a first-class league with first-class — albeit older — talent, and we can’t wait to see what the fuss is really all about.

Team Ring From Tech’s 1952 Perfect Season Up For Auction

A piece of Georgia Tech history is for sale. 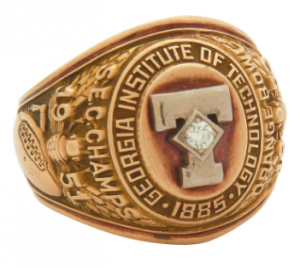 A ring commemorating the Yellow Jackets’ shared national championship season in 1952 is being auctioned. As of Tuesday afternoon, the highest bid on the Lelands auction house website was $777. The bidding closes at 9 p.m. Friday.

A Lelands spokesman said in an email the seller’s identity is a “mystery,” but it appears to have belonged to longtime Tech assistant coach Lewis Woodruff. The ring is inscribed with the initials LCW, and Tech’s digital archives identify Woodruff in a photo as “Lewis C. Woodruff.” Tech’s media guide does not list another coach or letterwinner who was on that team with those initials.

Woodruff coached at Tech from 1947-67. According to the school archive, he worked at Cousins Properties until his retirement in 1977 and died in 1988.

According to Lelands, the ring is 10-karat gold and is rated in near-mint condition.

Tech completed the 1952 season 12-0, winning the SEC and the Sugar Bowl, and was in the midst of a 31-game unbeaten streak. The Jackets were No. 2 in the AP and UPI (coaches) final polls and were named national champion by the International News Service.

The team included six All-Americans, including linebacker George Morris, considered Tech’s best player in the Bobby Dodd era, and another, center Larry Morris, who was named an All-American a year later. Both Morrises (who were unrelated) made the College Football Hall of Fame, as did Dodd, the coach of the team.

Ex-NFL quarterback Todd Marinovich has been sentenced in his bizarre drug case and will avoid jail if he plays his cards right … but the good news is he’s been sober for 8 months!

As we previously reported, the former USC star was arrested back in August after cops say they found him naked in a stranger’s backyard. Police say he also ditched a bag of drugs near the property.

The judge gave him 90 days in jail, but he won’t have to serve any time behind bars if he completes a 6-month outpatient rehab program.

His lawyer, Adam Cole, tells us the ex-QB has been sober and in a treatment program since his arrest and is in “super good spirits.” We’re told he’s planning on doing community outreach for other at-risk people.