Atlanta Braves pitcher Mike Foltynewicz got into it with a fan at a Chick-fil-A in Florida — allegedly telling the guy to “meet me outside” … this according to the police report obtained by TMZ Sports. 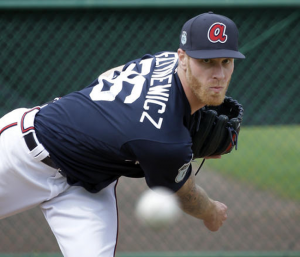 Mike — who’s in Kissimmee for Braves Spring Training — was chillin’ at the chicken joint in nearby Osceola County with his wife on March 9 when he was confronted by a man asking for an autograph.

The fan says Mike cussed him out and challenged him to a fight saying, “We’re gonna do this man-to-man” and “Meet me outside!”

Cops were called but Mike was gone when they arrived. They spoke with employees who said Mike did cuss but didn’t pose a real violent threat.

Surveillance footage shows Mike trying to walk away from the fan and sit at a table in the back — before eventually changing his order to go … and leaving.

Cops say the fan is leaving to go back to Tennessee and likely won’t ever encounter Mike again … so they’re not pushing forward with a case against the MLB player.

Falcons receiver says he could beat Usain Bolt in a race, but there’s one catch:

Could Taylor Gabriel beat the world’s fastest man in a foot race?

As it turns out, Gabriel is so fast that he thinks he might actually be faster than the fastest man in the world. During an interview with NFL Network’s “Good Morning Football” this week, the Falcons receiver said that he could probably beat Usain Bolt in a race.

However, there is one catch: The race would have to be much shorter than Bolt’s specialty of 100 meters. With a time of 9.58, the Jamaican track star holds the world record in that event, and since Gabriel isn’t crazy, he wouldn’t want to race Bolt at that distance.

Instead, Gabriel would prefer a much shorter race.

Just to make sure everyone was on the same page, the host then asked Gabriel if he was sure he “could beat Usain Bolt.”

Just in case you’re wondering, 30 yards is roughly the equivalent of 27 meters, so Gabriel obviously feels real good about his starting ability and not so good about his finishing ability in a race against a sprinter like Bolt.

Since you’re now probably wonder what Gabriel’s 40 time was, according to ESPN.com, he ran a 4.27 at his pro day in 2014. If you’re wondering what Bolt might do in a 40-yard dash, FreeLapUSA.com actually tried to answer that question once. Based on their estimation, Bolt could potentially run anything from a 3.96 to 4.20.

The faster time would have to come under ideal conditions — basically, he’d have to run on a track surface with track spikes and use a starting block. However, NFL players don’t get those things at the combine, so if Bolt had to run under their conditions (field turf, no track spikes, no starting block), he’d probably run something closer to the 4.2 range.

Pro Football Talk’s Mike Florio shed light on why the Texans shipped Osweiler to Cleveland after just one season in Houston. According to PFT, the Texans decided to move on in part because of an incident involving Osweiler and coach Bill O’Brien.

At halftime of the Texans’ Week 17 loss to the Titans, Osweiler was told that he’d be finishing the game due to Tom Savage’s concussion. This is what happened next, per PFT:

Osweiler, per the source, reacted negatively, telling O’Brien in the visiting coach’s office at Nissan Stadium in Nashville that he’s only playing Osweiler because O’Brien needs him. An argument ensued, voices were raised. At one point, it’s believed that Osweiler got up to walk away and O’Brien threw out an arm to stop him. That prompted Osweiler to act as if he were being “held hostage,” a claim that he would repeat (per the source) in the days after the game.

And that was that for Osweiler in Houston. Following that incident, the team was determined to find a way to move on from him.

That should sound somewhat familiar. In October, CBS Sports NFL Insider Jason La Canfora reported on the rising tensions between the player and coach:

According to the source, Osweiler objected to some play-calling decisions during a routine meeting reviewing the Week 5 loss — O’Brien took over play-calling duties a few weeks into the season — and he and the head coach subsequently had a loud charged interaction after that meeting that did not go unnoticed by others.

Shae Simmons left Saturday’s game in the middle of the seventh inning with an undisclosed injury, Greg Johns of MLB.com reports.

The specifics of the injury aren’t yet known, but it could be reason to worry as the 26-year-old has dealt with arm problems in the past. Simmons underwent Tommy John surgery in 2015 and missed time with forearm soreness last year, so the Mariners are likely going to handle him with caution. He should be considered day-to-day until the Mariners reveal more about his status.

“Just precautionary,” Mariners manager Scott Servais said. “Get him out of there. The trainer noticed it right away. Now is not the time to take any chances. We’ll take a look at it and see how it is.”

Justin Bieber to Female Fan: “Look at You … You Make Me Sick”

Justin Bieber was grossed out by a female fan getting all up in his space for a pic, and he let her know it … straight up. This according to TMZ.com

Justin was in Melbourne, Australia Saturday, where a young girl tried snapping a selfie of herself next to the pop star as he grubbed on some finger food. He lectures her on respect … and then burns her with a harsh line.