Maybe Colin wore his BEATS in history class. He really didn’t just insist that the Confederate Flag is the same as the American Flag, did he?

To compare those two flags, those two eras and more importantly the message behind them as the same is pure ignorance.

Don’t stand up for something you don’t believe in. I back your right to do that. Don’t though be so ignorant as to claim that life for Black Americans is not distinctly different. Perfect? Absolutely not. Anything like the Confederacy era? Ignorance. Unfortunately it kills legitimate conversation over legitimate issues.

KIRBY-MANIA IS AT A FEVER PITCH

The talk is just about over. The future is now. Kirby Mania hits the Georgia Dome on Saturday. I’ll be honest with you, since I’m not a “Georgia guy” I am rarely bouncing off the walls to see a game. This week is different. In fact, everything about Kirby Smart just feels different.

Monday’s at Noon Kirby takes center stage on Buck and Kincade. I’m expecting a brisker, more informative and energized press briefing. Shame, I grew attached to hearing how tall the punter was and what the kicker weighed. Don’t miss it.

FALCONS SAY IT ALL DOESN’T MATTER

It is the biggest cop-out in professional sports. Tell your fans that the pre-season does not matter. Tell them what they saw with their own two eyes wasn’t really all that bad. After a winter of building up fan expectations, just three exhibition games have shown the product is not that improved.

The Falcons know that the 8-8 season was looked upon as a disaster because of the way they finished. The start this year is more important than ever.

BRAVES MARCHING TOWARDS THE CLIFF 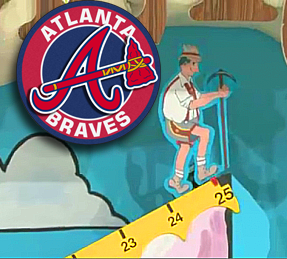 Every time I think things are getting better, they spiral out of control.

It’s not even worth trying to find silver linings anymore. Get to the off season and show me you are serious about spending and turning this thing around.

Already the only Sports Radio Host in the Top 100 Twitter Follows in Atlanta month after month, thanks for the elusive blue check. Jump on board @johnkincade