Darren McFadden fractured his right elbow trying to keep his new iPhone from hitting the ground and cracking.

The Dallas running back is likely to miss the start of training camp as a result, and fourth overall pick Ezekiel Elliott is that much closer to starting.

McFadden’s injury happened at home over Memorial Day weekend, and he missed the next voluntary practice that was open to reporters. But he returned to workouts last week, eventually telling trainers that the elbow was still bothering him.

The fracture showed up on X-rays as part of the physical before mandatory minicamp that started Tuesday, the same day of surgery for the Cowboys’ leading rusher in 2015.

Coach Jason Garrett said McFadden would miss “at least a couple of months,” and training camp in California starts in late July. The Cowboys hope to have him ready for the season opener.

“He didn’t want to miss any time. He understands what’s going on and how this business works and you really got to appreciate that about him because I know I do.”

McFadden finished fourth in the NFL last season with 1,089 yards rushing despite not taking over as the lead back until the seventh game during a 4-12 season. But the Cowboys still decided to take Elliott, the former Ohio State star, with their highest draft pick in 25 years.

Dallas quarterback Tony Romo’s fantasy football event has been called off for the second straight year, with more claims of interference from the NFL.

An attorney for the company partly owned by Romo said Tuesday that the fan-centric event scheduled for July 15-17 in the Los Angeles area was being postponed “because of the NFL’s continued and calculated actions” against Fan Expo LLC.

More than 100 players, including Cowboys receiver Dez Bryant and Kansas City running back Jamaal Charles, were expected to attend.

The National Fantasy Football Convention, or NFFC, was to include panels with fantasy experts and autograph sessions with players at the Pasadena Convention Center. There were also plans for six participants to conduct a draft with six NFL players to form a 12-team fantasy league.

“Sadly, because of the NFL’s continued and calculated actions against the NFFC, including Tony, and against the other NFL player participants, in addition to the NFFC sponsors and even the NFL’s own media folks who had committed to participate with the NFFC, the event is being postponed,” attorney Michael Hurst said.

Hurst said the restraining order has expired, but that NFL attorneys “have sworn in open court that they have not contacted any other sponsors and do not intend to do so.”

“The NFL has been forewarned that if they do contact any other sponsors for the purposes of harming the NFFC, the NFFC and the court will take action,” Hurst said.

Event organizer Andy Alberth stopped short of saying the event was postponed. On Tuesday night, there was no mention on the website of a letter to fans announcing the postponement and offering refunds.

“We are exploring all options,” Alberth said. “It’s been an uphill battle considering we’re having to fight the 800-pound gorilla.”

Last year’s postponement sparked a lawsuit, but a major element was thrown out earlier this year when a Dallas judge dismissed a claim that the NFL intimidated players with threats of sanctions over the planned Las Vegas event.

Joe Maddon interested in taking actor up on cameo in ‘Curb’

Though he’s known for his effervescent demeanor, Chicago Cubs manager Joe Maddon is more than willing to curb his enthusiasm if it means a television cameo.Maddon, Chicago’s second-year manager, said he is excited to take up actor and rabid Cubs fan Jeff Garlin’s invitation to appear on the HBO show “Curb Your Enthusiasm” after it was announced the comedy would return with new episodes after a long hiatus.

Speaking on ESPN 1000 earlier in the day, Garlin reiterated his long-standing invitation.

“I promised him,” said Garlin, a Chicago native. “I’m being very public about it. I’ll do my best to get him on. And when I say ‘do my best,’ I think it will happen. And it’s during the offseason, so we’ll do it.”

Ready for his closeup? Cubs manager Joe Maddon feels pretty good about the idea of making a cameo on the HBO show “Curb Your Enthusiasm”. Matt Kartozian/USA TODAY SportsGarlin said he thinks shooting will begin in “January or February” and that even if it runs into spring training Maddon didn’t think it would be a problem.

“I can miss that,” Maddon joked. “[Bench coach] Davey’s [Martinez] got it. … If he said he’s going to make it happen, it’s going to happen.”

Garlin said that Larry David, the show’s star and creator, is a big baseball fan who would be more than happy to welcome Maddon to the show.

“A one-line part at a restaurant or something,” Garlin said of Maddon’s potential role.

Maddon said he doesn’t want to play himself, but Garlin intimated that’s exactly the part he would play. Garlin has the same admiration for Maddon as Maddon has for the show. And Garlin said he thinks this could be the year for the Cubs.

“It will overwhelm me like the birth of a child,” Garlin said laughing. “I will probably just sit in my seat crying, inconsolable. People should not approach me at that point.”

In Garlin’s estimation, the Cubs’ fortunes turned for the better once Maddon showed up.

“The whole change was when Maddon came on board,” Garlin said. “Maddon was a game changer.”

“Obviously he’s not anywhere close to where he needs to play at a high level,” Ryan said, via The Buffalo News. “So we’ve got to get some weight off him and he certainly understands that.”

So why did Williams put on the weight? Is it because of laziness and not working out?

Nope. According to Williams, he started to eat more food because his pregnant fiancée was eating, too.

“I like to eat and then her being pregnant gave me an excuse to eat, so eating anything and everything,” he said Tuesday, via ESPN.com. “She’d wake up, one or two o’clock, ‘I want a snack.’

“Well I’m not going to sit here and watch you eat because I don’t want you to feel bad.” 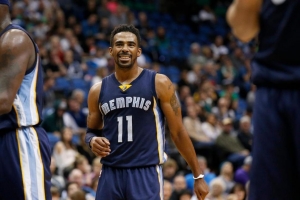 The Memphis Grizzlies had a tough year on the basketball court. They battled through tons of injuries, and yet somehow still made the playoffs without most of their essential pieces.

One of those pieces was point guard Mike Conley, who has spent his entire career with the Grizzlies. Conley is set to be a free agent this offseason, and with good point guard play more coveted than ever, there’s a good chance that Conley has played his last game in a Grizzlie’s uniform.

ESPN’s Ian Begley put it into perspective, including Justin Timberlake as a pitchman for the Grizz:

Here’s a bit of potentially good news for those Knicks fans interested in free agent Mike Conley: some members of the Grizzlies front office are growing a bit concerned about the possibility of Conley leaving in free agency, per a source with knowledge of the situation. Memphis, which plans on using a video featuring Grizzlies part-owner Justin Timberlake as part of its recruiting pitch, per a source, can offer Conley a five-year deal worth approximately $124 million. Other clubs can ink Conley to a max contract for four years worth approximately $92 million. Both Knicks coach Jeff Hornacek and GM Steve Mills has mentioned point guard as a position of emphasis for New York this offseason.

The Grizzlies certainly have money in their favor, and it surely doesn’t hurt to have a superstar like Justin Timberlake wanting you to stick around for the franchise. But the future of the franchise is very much up in the air, and Conley could very well find other situations around the league much more attractive, despite not being able to make as much money as he could in Memphis.

The 28-year-old point guard out of Ohio State has averaged 13.6 points, and 5.6 assists for the Grizzlies over his career, and has shown improvements almost every season that he’s been in the league.

While the actor was in Miami, the house was broken into and watches, jewelry, clothing and other personal items were stolen, the police confirm. The jewelry was valued at over half a million bucks..jeez

Fortunately, no one was home at the time of the burglary and police do not believe it was an inside job, though the investigation is ongoing and they are currently reviewing indoor and outdoor surveillance footage from the property to determine the culprits.

The house is located in a gated community in Tarzana, Calif. with two security guards at the entrance. Hart called authorities to report the robbery when he returned home Monday morning.

A fan petition would like to rename one of the streets leading to Auburn’s campus. A name that surely will let opponents and fans alike know exactly where they are headed.  Rename “Mike Hubbard Blvd” to “Cam Newton Run” is the petition

Fans have started a MoveOn.org petition to rename the street leading to the Auburn Regional Airport “Cam Newton Run” in honor of the Heisman and national championship-winning quarterback.

“With exit 57 serving as a prominent gateway to Auburn fans, prospective students, opponents and the like, ‘Cam Newton Run’ recognizes one of Auburn’s most famous graduates and athletes who has served as a prominent and effective ambassador for Auburn both on and off the field,” the petition states. “This rename also serves as a way to depoliticize what may be considered by many in this community to be a painful yet imminent name change .”

It takes a lot for a campus or government to name a street after a prominent figure. Newton, who is from College Park just south of Atlanta, certainly should have a presence somewhere in the Auburn community with some type of permanent honor — perhaps reserved for after his playing days.

Hubbard was a Republican member of the Alabama House of Representatives who was convicted on 12 felony corruption charges last week. Hubbard’s name also adorns a building on Auburn’s campus.

If you have a story for the confidential email to matt@680thefan.com or tweet me @realmattlanta