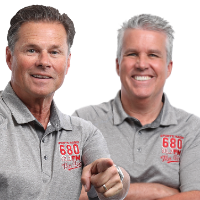 #1: Babe Ruth – Was There Ever A Doubt “The Great Bambino” Would Occupy This Slot?

The name synonymous with the game of baseball is Babe Ruth!  Among the giants of the game, Ruth stands alone at the top, recognized as the single greatest player the game has ever seen. Why the near-universal acceptance of Ruth as the Greatest of All Time?  Just look at where The Babe currently stands in 10 Key Statistics:

Even more amazing, when Ruth came into the majors, he was a pitcher who amassed a record of P 94-46 with an ERA of 2.28! This was not good enough for Ruth though!  He wanted to be an every day player, so he requested and got a move to the outfield where he played the majority of his remaining career.

There’s just too much information on this player’s greatness, so do yourself a favor and find out more about the Game’s Greatest Player on his WEB SITE, www.baberuth.com!

Without a doubt, around the Atlanta area, Hank Aaron is regarded as the greatest Brave and ballplayer that ever lived even though he lands at #2 on Dimino’s List (Which proves he’s NO HOMER!).  Though he falls into the “bridesmaid’s spot” on the list, his baseball chops could make him a viable argument for the top position.

First of all, Aaron holds the record for All-Star Selections at 25, and holds the record with Stan Musial and Willie Mays for the number of All Star Games played at 24! But that’s just the beginning…

During his career, Aaron won 3 Gold Gloves, was the NL Batting Champ Twice, the NL Home Run Leader 4X, the NL RBI leader 4X, and his signature achievement came April 8, 1974 in Atlanta in front of a record crowd of a crowd of 53,775 when he hit his 715th home run surpassing the great Babe Ruth.

At the time of his retirement, Aaron held most of the game’s key career power hitting records.

The Most Famous Home Run in History!

#3: Ted Williams – The Last Baseball Player With A Batting Average North of .400 For A Season!

When Ted Williams was in the Pacific Coast League Minor League System, a Boston Red Sox talent scout said of Ted Williams, “He stood out like a brown cow in a field of white cows.

That particular scout KNEW greatness when he saw it!

#4: Willie Mays – The “Say Hey Kid” Is Regarded As the Best All-Round Baseball Player In History

When it comes to physical gifts required to play the game of baseball, Willie Mays was one who was lavished with many!  Considered to be the greatest all-round baseball player who ever lived, Mays’ career stats place him among the elite of the elite in MLB history!  It started his first season with his being named Rookie of the Year in 1951, and over 24 seasons, Mays compiled 24 All-Star Awards, 2 NL MVPs, 12 Gold Gloves, one NL Batting Crown (1954), and a 4X Home Run Leader, and the stolen base leader 4X (1956–1959).

When we move into the top five baseball players of all time, there is no dispute that THESE players are the absolute best of the best among those who have played the game, and at #5 Lou Gehrig was DEFINITELY one of the best!

Sadly, all of Gehrig’s accomplishments on the diamond were eclipsed when Gehrig disclosed that he was suffering from ALS in 1939, Later to be known as “Lou Gehrig’s Disease.”  According to the NY State Department of health,

“ALS is a progressive disease that destroys nerve cells in the brain and spinal cord which control the muscles throughout the body. When these nerve cells (also called motor neurons) die, the brain can no longer send impulses (messages) to the muscle fibers that normally result in muscle movement. The disease most commonly afflicts people between the ages of 40 and 70. As many as 30,000 Americans have the disease at any given time.

The earliest symptoms of the disease depend upon which nerves and muscles are first affected. Any muscle group may be the first to show signs of the disease. For example, the person may experience twitching and weakness of the muscles of the hands or lower legs. If the muscles of the face or throat are affected, the problem at onset would be difficulty with speaking, chewing, swallowing or movements of the tongue and face. If the muscles of the chest are affected the person may have difficulty breathing. In some instances the first symptoms may be involuntary weeping or laughing. In the beginning, muscle groups on only one side of the body may be affected, but as time passes, more and more muscles on both sides are involved and the patient becomes totally paralyzed. Yet, through it all, for the vast majority of people, their minds remain unaffected.

The Most Famous Baseball Speech In History

#6: Mickey Mantle – One of the Greatest Switch Hitters Ever

#7: Stan Musial – Known simply as “The Man”…and for GOOD Reason!

Stan “The Man” Musial is a walking baseball statistic who at one time or another led the Majors in every conceivable record EXCEPT home runs!  When you look at his body of work, there’s no doubt Musial is one of the elites of the game!  Consider these stats: Lifetime batting average of .331, 475 Home Runs, 3,630 Hits, 1,950 RBI, named an All Star 24X, 3X NL MVP, 7X NL Batting Champ, 2X NL RBI Leader and the topper – He was a first ballot Hall of Fame Inductee in 1969!

This is the last pitcher on Dimino’s list, and in his opinion, the BEST pitcher on this list…YES BETTER THAN CY YOUNG, and some of his records stand NINE DECADES since Young retired from baseball!

Let’s start with the man’s statistics: 802 Games pitched, 417 Wins (2nd All Time), 3,509 Strikeouts, and a lifetime ERA of 2.17!  Johnson also holds the MLB record for Shutouts with 110, is second all time in complete games with 531 and was the strikeout leader 12X, eight of which were consecutive!

One other thing to mention too: Johnson was regarded by players and fans as one of the NICEST guys ever to play the game, and whenever his named was mentioned it was always used as an example of good sportsmanship and friendly competition.

#9: Yogi Berra – The Master of the Mangled Quote!

Yogi Berra may be the ONE player in all of baseball history who is remembered more for what he did OFF the field than what he did on it!

Berra played 19 seasons in Major League Baseball (1946–63, 1965), all but the last for the New York Yankees. He was an 18-time All-Star and won 10 World Series championships as a player—more than any other player in MLB history!

Berra had a career batting average of .285, hit 358 home runs and drove in 1,430 runs, he is one of only five players to win the American League Most Valuable Player Award 3x, and is widely regarded as one of the greatest catchers in baseball history! In 1972, Berra was inducted into the Baseball Hall of Fame.

“Yogi-isms”
As mentioned earlier, Berra is probably more well known for his impromptu pithy comments, malapropisms, and seemingly unintentional witticisms, known as “Yogi-isms.”  More often than not, they seemed contradictory in nature, but with smatterings of truth and wittiness.  Some of his most famous quotes have gone on to become everyday American phrases like:

No one goes there nowadays, it’s too crowded.

Baseball is 90% mental and the other half is physical.

A nickel ain’t worth a dime anymore.

We made too many wrong mistakes.

Slump? I ain’t in no slump… I just ain’t hitting.

The future ain’t what it used to be.

And possibly his most famous quote:
It ain’t over till it’s over. 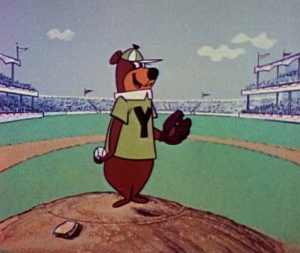 And yes, THIS cartoon bear is widely acknowledged to be named after Yogi Berra! Click the picture for the “official” story!

#10: Rogers Hornsby – The Cream of the Baseball Crop Starts HERE!

Nicknamed “The Rajah,” Rogers Hornsby, was a baseball player who COULD do it all!

This much ability comes with consequences, however.  Hornsby hasd a reputation in the club house as someone who was difficult to get along with and was not well liked by his fellow players. You can’t blame his bad attitude on boozing or drug use though, because Hornsby never smoked, or drank. He DID frequently gamble on horse races during his career, so maybe one too many last-place nags he bet on made him a “grumpy gus.”

His attitude is irrelevant though!  It’s his supreme baseball skills that lands Rogers Hornsby in the Top ten of Dimino’s Top 100!