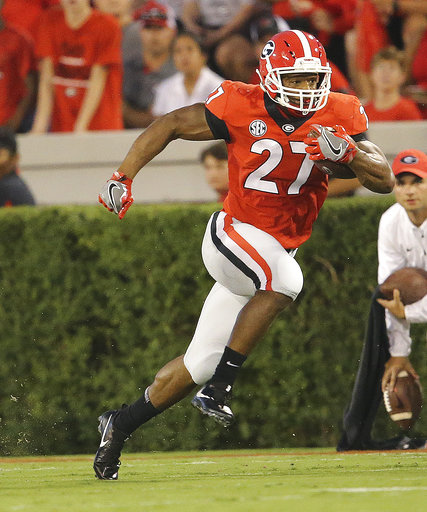 By now, I’m sure you’ve heard the audio recording of controversial Valdosta football coach Rush Propst allegedly making many different claims about Kirby Smart, Nick Saban and Chubb. Again, these are strictly allegations and nothing has been proven. But, Propst is alleging that Smart arranged for a series of payments totaling $180 thousand dollars to keep the former Georgia running back from declaring for the NFL Draft at the end of the 2016 season.

Let’s just compare perceptions of each person, shall we? Chubb is known for his strong work ethic, perceived humility and being a great teammate. The positive descriptions of Chubb could go on, but these are the ones that immediately come to mind. Propst’s reputation? Not great. Just do an internet search, if you’re not caught up.

Prior to Chubb’s brief tweet on Monday night, he had last posted something on his page in late February. He’d retweeted a post by David Pollack. This just shows you how important it was for Chubb to stand up to defend himself. He has a reputation as a person and player to uphold. He also doesn’t speak a lot about himself. I listen to the people who are known for their work/character over their words a little closer when they speak.

Do I expect Chubb to admit to taking money, if he did? No. But, I also don’t take him as someone who would flippantly deny something, if there was any amount of truth to the allegations.

This is the all-time “consider the source” moment. Propst has led a deceptive life during his coaching career. It seems that controversy has followed him, wherever he ends up coaching. The most recent evidence, is this recording that allegedly involves him and a now former member of the Valdosta High School Touchdown Club.

Remember what I said the other day, about how I base my takes on certain topics? I know that Chubb has a great reputation and seemingly is a man of very strong character. I don’t know him personally, only professionally from his time at Georgia. Propst does not have that same perception in the eyes of many. I’ll trust Chubb every time.