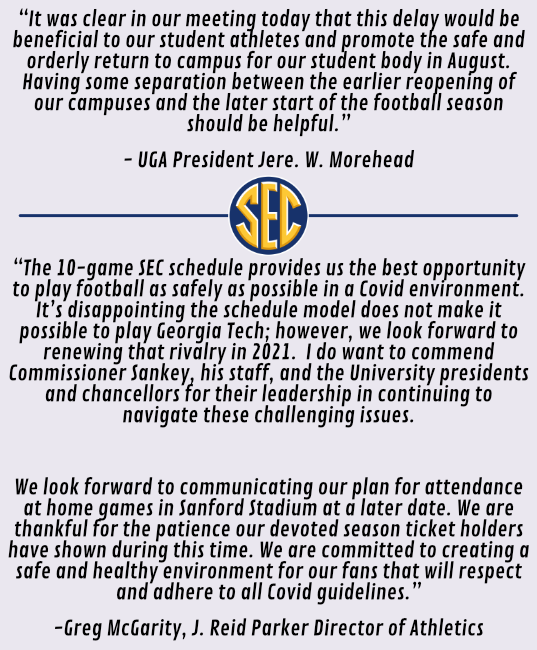 The start of the season is pushed back to September 26. The SEC Championship Game is to be played December 19.

This decision was made after a meeting of presidents from SEC member institutions. The athletic directors approved this scheduling scenario on Wednesday.

The move by the SEC erases Georgia-Georgia Tech for at least this season. The two teams have played every year since 1925.

SEC Commissioner Greg Sankey wishes that non-conference games could have still been played this year. He says that after many discussions, that was not going to be an option.

“We believe these schedule adjustments offer the best opportunity to complete a full season by giving us the ability to adapt to the fluid nature of the virus and the flexibility to adjust schedules as necessary if disruptions occur,” Sankey said in a press release from the SEC. “It is regrettable that some of our traditional non-conference rivalries cannot take place in 2020 under this plan, but these are unique, and hopefully temporary, circumstances that call for unconventional measures.”

The SEC will release the 2020 schedule at a later date, after it is approved by the conference’s AD’s.