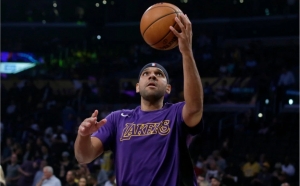 CHUCK OLIVER
680 THE FAN, ATLANTA – The NBA is now considering a different sort of math. I commend the league.

That Title Island or Playoff Boat, taking over Mandalay Bay or MGM in Vegas and having the playoffs self-contained in a single resort, whatever they were talking about, it’s not the priority anymore. Good for the league troubleshooting this and realizing the very obvious way it plays out is 10 ways of Really Bad.

Imagine the spot that format puts Anthony Davis in. Or LeBron. Or Jared Dudley. The virus does not discriminate, money and power and fame and talent and every other powerful positive thing in anyone’s lives, yeah, Corona don’t care. SO…

I’m either the best player of the past 20 years or I’m Jared, the last guy in sweats who appeared in 2 games. I don’t feel comfortable playing.

In fact, kids, spouse, parents, friends, all of them and more, “I love them more than the NBA paycheck so I’ll honor my contract, I’ll play. Just after this is ALL gone from everywhere, then I’ll be back. I just want to be with my family and stay safe till then.”

If it’s Dudley it’s not news, not really. If it’s LeBron and he says he’s not playing? You either can’t have the tournament or you have it without him and whoever else from whatever other rosters and then you’re looking around thinking, “ . . . this isn’t legit.”

You also have the very real dynamic of, “Well, hell, everybody is looking at me as a bad teammate now, guess I have to go. I don’t want to. This sucks. I have to or I’m a cut-and-run guy.”

THAT, all of it, that’s what’s going through the owners’ and league officials’ minds right now. As well as, what happens when three players test positive after the very first game. You cancel it then, anyway, and correctly so look like you WERE HAVING PLAYOFFS!!!! no matter what.