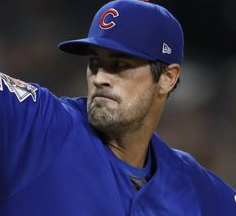 BY KEVIN MCALPIN
680 THE FAN ATLANTA – As pitchers and catchers (along with a number of early arriving position players) filed into the clubhouse at CoolToday Park in North Port, there was one noticeable no-show. Cole Hamels, signed by the Braves to a one-year, $18 million dollar deal in December, will be sidelined for at least the next three weeks as he deals with a sore shoulder. Brian Snitker announced the news on Wednesday morning that Hamels is still in Dallas, TX dealing with an injury he suffered this offseason working on weighted ball drills.

“He didn’t give us any concerns, he feels good about where he’s at right now” Brian Snitker said on Wednesday. It’s just more precautionary to where you shut a guy down and get him well and get him right” Snitker added. Shoulder injuries are nothing new to Hamels who missed (what would have been) his third career start with the Phillies in 2006 and has had issues with the same shoulder in 2009 and 2011, also with Philadelphia.

With Hamels being sidelined for at least half of Braves camp, opportunity now arises for young arms like Kyle Wright, Bryse Wilson, Touki Toussaint, Ian Anderson and others to possibly help bridge the gap until Hamels is healthy. While the news on Cole Hamels wasn’t good on Wednesday morning, that’s the only real injury issue for the team as they get set for their first official workout of 2020 tomorrow morning here in North Port.

Kevin McAlpin has covered the Braves since 2012 for @680TheFan and @BravesRadioNet.