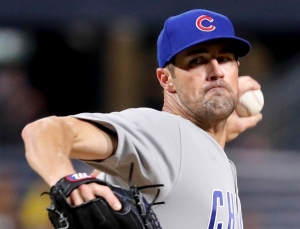 KEVIN McALPIN
ATLANTA, Ga – It’s already been a busy offseason for the Braves, who once again were aggressive to fill a void in their starting rotation with lefty Cole Hamels on Wednesday. The soon-to-be 36 year old southpaw was originally a first round pick of the Phillies in the 2002 Draft and spent the first ten seasons of his Big League career in Philadelphia. Hamels, a four time All Star, was named World Series MVP with Philadelphia in 2008, a postseason that saw him post a 1.80 ERA with 28 of his 35 innings pitched scoreless. Hamels has also spent time in Texas (2015-2018) and most recently with the Cubs (2018-2019) and threw a no hitter with Philly in 2015 and was the starter the night the Phillies tossed a combined no-no Sept 1, 2014 at Turner Field.

Hamels will fill the role in the rotation left by Julio Teheran but this signing doesn’t necessarily take them out of the Madison Bumgarner sweepstakes. Keep in mind there are technically two spots available with Dallas Keuchel also departing via free agency. This signing shows once again that the Braves aren’t holding back this offseason. And the fact that they’ve sured up the bullpen and rotation speaks volumes to the fact that they’ll continue to make resigning Josh Donaldson a high priority.

While the club has said Sean Newcomb will get an opportunity this spring to rejoin the rotation, I’d expect the club to continue to look for another veteran to add to a relatively young mix. Also, with the one year pact with Hamels, it doesn’t block any of the young pitching prospects like Ian Anderson, Kyle Wright and others who have shown they’re knocking on the door of being Big League ready.

Kevin McAlpin has covered the Braves since 2012 for @680thefan and the @bravesradionet.