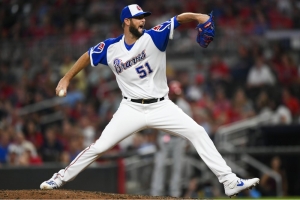 ATLANTA – The Atlanta Braves tonight signed RHP Chris Martin to a two-year contract worth $14 million. Martin will make $7 million in each year of the deal. The Braves now have 39 players on the club’s 40-man roster.

Martin’s 0.81 BB/9 ratio last season led all qualifying relievers. The next closest reliever was Oakland’s Yusmeiro Petit with a 1.08 mark.