The Atlanta Falcons are not exercising kicker Matt Bryant‘s team option for the 2019 season, meaning he will become a free agent when the NFL’s new league year begins on March 13.

“I am extremely grateful for everything that Matt Bryant has done for this organization over the last 10 years,” general manager Thomas Dimitroff said in a statement announcing the move.

“There is no doubt he is one of the all-time great Falcons, as he’s been an integral part of our success. This was a difficult decision but one that was necessary for us to move forward into 2019. We have the utmost respect for the person and the player that Matt is, and we wish he and his family the best going forward.” 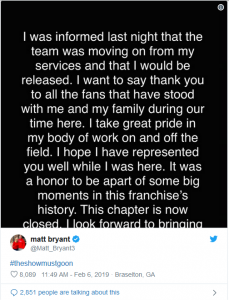 Bryant, who has dealt with some nagging leg and back injuries, went on to say he was looking forward to bringing success and consistency to his next team, with no plans to retire.

The Falcons likely will turn to Giorgio Tavecchio as their kicker. Tavecchio, who is signed through 2019 and will make $645,000 next season, made all five of his field goals and all eight extra points in place of Bryant last season.

The news comes a day after the Falcons parted ways with starting cornerback Robert Alford, saving $7.9 million against the 2019 salary cap.

Defensive lineman Brooks Reed also indicated on social media that he has been released, thanking the Falcons in an Instagram post for his four seasons with the team. The Falcons would save $4.5 million against the 2019 cap by releasing Reed.