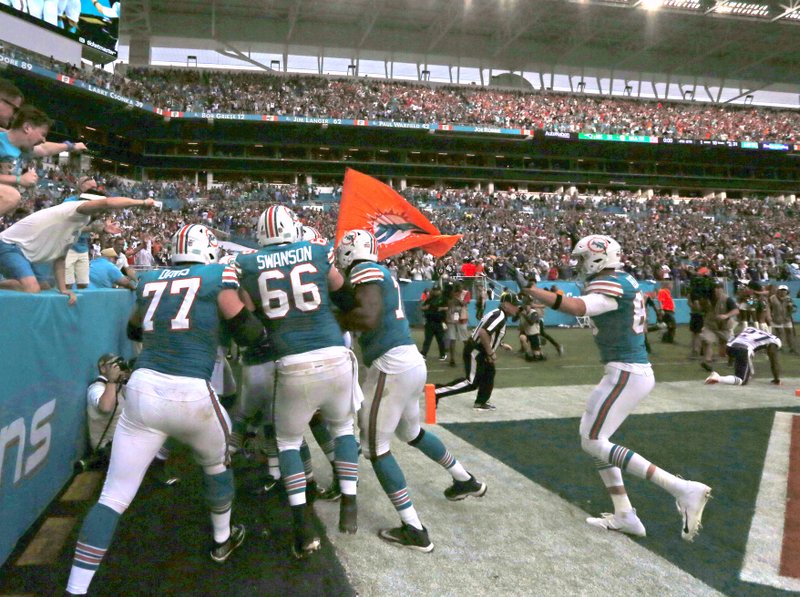 The Miami Dolphins celebrate with running back Kenyan Drake after he scored the winning touchdown during fourth quarter of an NFL football game against the New England Patriots Sunday, Dec. 9 2018, in Miami Gardens. The Dolphins won 34-33. (David Santiago/Miami Herald via AP)

In viewing areas across America, from sports bars to living rooms, explosive cheers rang out.

Whether the way the Patriots-Dolphins game ended is worthy of being dubbed the South Beach Stunner or South Beach Bummer depends on your perspective.

Maybe stick with “Boise,” which is what coach Adam Gase called this bit of razzle dazzle.

Or Stick with “The Drake Escape” if you will, as Miami’s Kenyan Drake finished off a 69-yard reception-and-lateral marvel to lift the Dolphins past the Patriots 34-33. It’s the latest in the line of unforgettable plays that not only draw nicknames, but live in both celebration and infamy — again, depending on your perspective.

Drake’s view was simple: a miracle.

“Until I got in the end zone . I mean honestly, I’m sitting before you all and I still don’t believe it,” he said during interviews after the improbable conclusion sent New England to its fifth loss in the last six visits to South Florida.

“I just saw it was Gronk (Rob Gronkowski) in front of me and I was just like ‘Look, I’ve got somewhere to be.’ So I had to get in the end zone.”

The fact that the Patriots’ superb tight end was playing safety on the desperation play was about as bizarre as the play itself — the longest to win a game with no time remaining since the NFL-AFL merger was finalized in 1970. Sure, it made sense for the 6-foot-7 Gronk, with his long reach, powerful body and sticky hands, to be in for a “Hail Mary” pass into the end zone. But Miami quarterback Ryan Tannehill wasn’t likely to throw the ball 70 yards.

So the hulking Gronk was no match for the speedy Drake, not even after the Dolphins running back had sped most of the 52 yards he carried the ball after receiving a lateral from DeVante Parker. Who had taken a lateral from Kenny Still after Tannehill’s short completion.

Guess Bill Belichick got outsmarted by Gase on this one. One of the Patriots coach’s former star safeties, Rodney Harrison, questioned the strategy on NBC’s halftime show Sunday night, astonished that Devin McCourty — nearly as good a player as Harrison was — stood on the sideline.

“Every time we practice it, it’s for the Hail Mary,” said Gronkowski who admitted he tripped chasing Drake. “You’ve got to be ready for anything. It’s football. Just the way it ended, I mean, it sucked. I mean, I’ve never really been a part of anything like that.

“I feel like it’s going to test our character big time, how we bounce back from something like that. I’ve just got to make that tackle.”

Such odd situations tend to always be part of unfathomable plays. Jack Tatum deflecting Terry Bradshaw’s pass directly to a spot where Franco Harris can make a shoestring grab and turn the Immaculate Reception into perhaps the most memorable play in pro football history.

Or the Giants’ coaching staff opting to skip a kneel-down and have Joe Pisarcik attempt a handoff to Larry Csonka with the clock running down. Voila: the Miracle at the Meadowlands for Herm Edwards and the Eagles.

Or the Music City Miracle in which the Buffalo Bills left the entire left sideline open for Kevin Dyson to take a cross-field lateral and speed to a playoff victory for the Tennessee Titans.

Whether this play reaches that level of significance and remembrance remains to be determined. Suffice to say that, for now, it is the play of 2018 — particularly when it happens to and not for the Patriots.

Fans just about everywhere outside of the New England region rejoice when the dynasty from Foxborough loses so dramatically and spectacularly. It happened when the Patriots were unbeaten in 2007 and the Giants slayed the AFC giant in the Super Bowl. Same thing four years later. Same thing when the Eagles turned the trick last February.

And this was built basically on one improbable play.

“They kicked the field goal,” Tannehill explained, “and we have one play, so you know it’s a long shot. Just the emotion of that, and then obviously the elation of seeing KD get in the end zone, it’s pretty much as drastic of emotions as you can get right there, of knowing you don’t have much of a shot to winning the game.”

And yet you win.

How lasting the impact will be, who knows? As Stills said: “The Miami miracle? I like that, but it means nothing if we don’t finish the season strong and find our way into the playoffs.”

As for New England, which was denied clinching its 10th consecutive AFC East crown Sunday, that will come soon enough. This could become a motivator for a team that doesn’t compare on defense to many if not all of the eight Super Bowl qualifiers since Tom Brady became quarterback. Or opponents will look more at what happened before the Drake Escape and see how leaky that D is and find more ways to attack it.