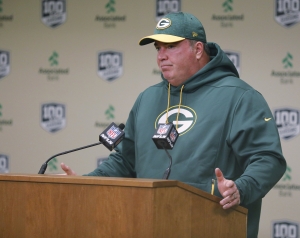 When a head coach gets fired during an NFL season, it’s as much about the culture of his team as it is about performance.

Yet, with what the Packers have become recently and where they appeared headed at 4-7-1 in a season when NFC wild-card berths are up for grabs, it probably was the correct move to let McCarthy go.

The offense, even with Rodgers, has stagnated. The secondary, as it is pretty much every year, is ravaged by injuries. The offensive line is a mess more often than it is a plus.

And the skills of one of the great quarterbacks of his era — an era when offense is paramount for success — are being wasted.

Team president Mark Murphy in a statement said the 2018 season “has not lived up to the expectations and standards of the Green Bay Packers. As a result, I made the difficult decision to relieve Mike McCarthy of his role as head coach, effective immediately.”

“Mike has been a terrific head coach and leader of the Packers for 13 seasons, during which time we experienced a great deal of success on and off the field,” Murphy said.

True. McCarthy also might find himself employed running another team in need of developing a quarterback (Jets? Buccaneers? Browns?) in 2019. For now, though, with the Packers severely underachieving and McCarthy unable to find answers against strong opponents or weak ones, his departure made sense.

“We haven’t played very well,” Rodgers said before being told McCarthy was fired. “We all take part in the disappointments and the failures that we’ve had this season. We’ve had a number of opportunities. It’s not like we’re getting blown out in a bunch of games. We’re in games.

“I hate to repeat myself, but it’s applicable. … We’re not executing the right way.”

Rodgers has never started a game for another coach, and he deserves some input into who replaces McCarthy. Whoever that might be, the least of his problems is quarterback, barring more injuries to Rodgers, who turned 35 on Sunday. Rodgers should have a few excellent years left.

The deeper problems in Green Bay stem from years of injuries to key players, particularly on defense, that approach an epidemic. Is players’ health not being vetted properly before they join the team? Are they not diagnosed or treated properly when they get hurt? Is it bad luck?

The Packers probably need to look into adding some talent through free agency before Rodgers is past his prime. That’s rarely been the approach on the tundra — yes, we know about Reggie White and Julius Peppers — but with Ted Thompson no longer the general manager, perhaps the thinking will change.

In the NFC North, where Chicago is on the rise and Minnesota has more overall talent than Green Bay, a quick infusion of talent is essential.

It would be somewhat ironic if McCarthy surfaced in Cleveland to work with Baker Mayfield. The Browns are the only other team to fire its head man thus far, and it would be surprising if Browns GM John Dorsey, who formerly worked for the Packers, isn’t interested.

The Jets, who lost their sixth in a row in ignominious fashion at Tennessee on Sunday, almost certainly will be letting go of Todd Bowles soon. They also have a rookie QB in need of a guru.

Meanwhile, the Packers begin a search they rarely make. Since 2000, they’ve had two coaches, Mike Sherman and McCarthy.

Joe Philbin is the interim. Whoever is next, Green Bay, make sure Rodgers has a say.