One of the NFL’s longest-tenured coaches, and one of two coaches who sit on the league’s competition committee, let loose Sunday with a blunt assessment of officiating in 2018. Speaking after his team’s 41-17 victory over the Atlanta Falcons, Pittsburgh Steelers coach Mike Tomlin said some of what he has seen is “a joke” and that he’s “pissed about it.”

Don’t write off Tomlin’s words as emotional postgame rantings. I also wouldn’t classify them as the kind of reflexive frustration that the NFL, and really every pro sports league, has heard about its officiating throughout its history. Tomlin is known in NFL circles as a level-headed defender of football, and his judgment Sunday reflects league-wide concern that the biggest problem of 2018 — an overcorrection in protecting quarterbacks by the league’s least-experienced group of referees in memory — will be more difficult to fix than anticipated.

There have been 11 flags thrown for roughing the passer in Week 5, despite a clarification issued Sept. 27 that was designed to address a spike in those penalties. Of those 11, none could be attributed to the league’s point of emphasis against falling on quarterbacks with all or most of a defender’s body weight. The rest were an amalgamation of incidental contact, non-forcible blows and a handful of avoidable late hits. 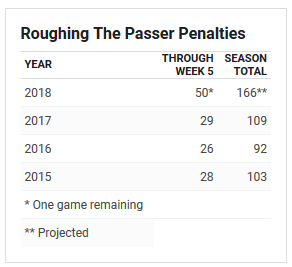 The surge of calls brought the NFL’s season total to 50 flags for roughing the passer, including those that were declined or offset, a 72 percent increase from last season’s numbers through five weeks. More importantly, it was a sign that referees are focused on a wider menu of offenses than the narrow point of emphasis had indicated, an apparent expansion that has caught many coaches and players by surprise. At its core, their most common reaction — “I don’t know what we are supposed to do” — is a clarion call for fans who want to see a fair game and for game-changing penalties to be justified.

In San Francisco, 49ers cornerback K’Waun Williams approached Arizona Cardinals quarterback Josh Rosen on a blitz. Williams jumped to bat down the ball and missed. In an effort to avoid hitting Rosen, he turned his body sideways in the air. His left arm then hit Rosen’s face mask, technically a violation of the rule prohibiting hits on the head or neck area of a quarterback in the pocket. The penalty wiped out a third-down incompletion and gave the Cardinals a first down.

In the most impactful call of the week, Philadelphia Eagles pass-rusher Michael Bennett approached Minnesota Vikings quarterback Kirk Cousins from behind. His initial contact against Cousins was above the knee, but he slipped toward Cousins’ feet as he brought him down for a sack. The resulting penalty gave the Vikings a first down at the Eagles’ 11-yard line late in the first half, rather than a third down at the 35, and helped them score a key touchdown in their 23-21 victory.

Referee Walt Coleman told a pool reporter that Bennett’s hit was “forcible,” which is a matter of judgment and ultimately at Coleman’s discretion. But if Bennett’s hit is the NFL’s interpretation of “forcible,” then it is hard to avoid a conclusion that there is a larger movement in play this season.

At its heart, roughing the passer is designed to protect quarterbacks. But as Eagles defensive end Chris Long told reporters: “It wasn’t like he was putting him in danger.” Eagles safety Malcolm Jenkins added: “I know they don’t want low hits on the quarterback, but if you’re falling down, I guess you’re supposed to just let the quarterback go? The explanation from the official is he has to avoid that hit, which means he can’t do his job. He can’t tackle the quarterback while he has the ball.”

And that is why this episode is a big deal. There will always be debatable calls in every sport. One mistake can overinfluence an assessment that should also include 99 correct calls. But we have a large enough sample size of this surge in quarterback protection. Over five weeks, it clearly has veered into an area that prompts a reasonable person to question the integrity of the game.

In the end, we all want the games we watch to be fair. We want officials to make sure players and coaches follow the rules, and we want them to throw their flags for clear violations. We should accept occasional mistakes, but it’s difficult to swallow a sustained gush of flags for acts that either don’t pass the eye test or run counter to the fundamental nature of the game — in this case, attempting to tackle the player with the ball.

That’s why I think Tomlin chose Sunday to speak up. We overuse the phrase “it’s just football” to paper over the violent nature of the game, but we’ve seen players penalized too often for playing football this season. If flags are thrown for reasons that don’t make sense to a majority of viewers, it means that the outcomes of games are in question.

And this particular foul is a really big deal. It’s a 15-yard penalty, meaning officials have walked off more yards for roughing the passer (622) than all but three other penalties, even though seven other penalties have been called more frequently.

Protecting quarterbacks will always be a priority, as it should be. They are the most important parts of the game’s entertainment model. But those efforts have moved outside the context of the game, a shift the league thought it corrected with the Sept. 27 clarification. That was not the case. Will Tomlin’s outburst represent a true tipping point? One way or the other, there is more work to be done — and quickly.