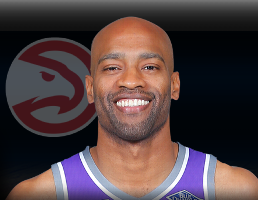 doesn’t judge his peers for chasing rings. But it’s not something that he plans to do.

“I come from an era where that’s not how it was. So that’s still instilled in me. And I don’t have any problem with how it’s done now. (It’s) just not for me,” Carter, 41, said Thursday on a conference call for the Jr. NBA World Championships.

Carter reached an agreement on a one-year, $2.4 million deal with the Atlanta Hawks last month, per ESPN’s Adrian Wojnarowski. So he’ll play his 21st NBA season with a team that isn’t expected to win many games.

When asked about the possibility of chasing a ring at this point in his career, Carter said he’d rather compete for minutes than serve as a mentor on a title contender.

“I still want to play the game,” Carter, the oldest player in the NBA said. “Whatever minutes are there, I want (them).”

Carter hasn’t ruled out the possibility of signing with a contending team next season if he felt he couldn’t contribute as much on the court, but he added, “I think before that happens I’ll probably retire anyway.”

Carter’s career began before two of the Hawks’ first-round picks (Trae Young and Kevin Heurter) were born. He said he decided to join the Hawks for ‘an opportunity’ to play and also to pursue his post-retirement plans.

“It’s a love. It’s tough to walk away. Obviously when it’s time, it’s time,” he said. “But I’m still passionate about it.”

Carter added that he’s ’90-something percent’ sure that he will retire after the 2018-19 season.  He averaged 5.4 points per game in a limited role for the Sacramento Kings last season.  An eight-time All-Star, Carter will play for his eighth team this year in Atlanta.

Carter said he plans to pursue a broadcasting career after he retires. He will serve as a game analyst during the Jr. NBA World Championships, which begin next week at Disney in Orlando.