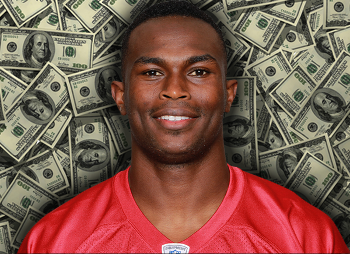 The Atlanta Falcons and Julio Jones might not be on the same page regarding renegotiating his deal right now, but adding incentives for 2018 might be the team’s best hope to appease the star receiver in the interim.

The Falcons made it known to Jones last month, as Adam Schefter confirmed, that they have no plans to extend him this season, with three years and almost $35 million left on the five-year, $71.25 million contract extension he signed in August 2015. But Schefter also reported that the Falcons could add incentives to modify the current deal. Jones is due to make $10.5 million as a base salary this season.

“The only way I see where both sides can save face is through incentives,” one current NFL agent told ESPN on the condition of anonymity. “If they give him some incentives that he possibly can achieve, then he can make more money. And the Falcons can sell it [to ownership] because they’re able to get some productivity out of it.

But would incentives be enough to lure Jones to training camp next week rather than his holding out, being fined $40,000 per day, and keeping the offense from practicing without its best player?

It could depend on how discontented the four-time Pro Bowler is about the contract situation. As Schefter reported, Jones is not happy that the news of his not getting an extension has leaked publicly.

The Falcons seem more than willing to address a Jones extension after 2018 when he has two years left on his deal. However, they seem hesitant to set a precedent by reworking Jones’ deal with three years remaining. The team typically extends players going into the final years of their contracts.

“When you do something with your very best player, you’re not setting a precedent for the whole 53-man roster,” the agent said. “Teams all the time hide behind the word ‘precedent.’ They’re trying to sell that because they’ll say, ‘If we do Julio with three years left, then every other guy with three years left is going to come to us.’ No. When you’re the best player at your position in the entire league, we’ll talk.

“The club can do right and acknowledge, ‘Hey, we’ve got our guy a little underpaid, but not dramatically by any stretch because we did front-load the deal. But we’ll give him something. And it’s not a precedent-setter unless you’re the best player in football.”