Adios Gregg Allman, Remember Those Who Gave All, Tiger Has Had Better Days, Men’s Lacy Shorts and Girls Gone Fishin’!

Welcome back my friends to the show that never ends. We’re so glad you could attend. Come inside, come inside. We lost another legend, Gregg Allman of the Allman Brothers Band. I’ve had the opportunity to interview Gregg Allman many times over the years, but, the encounter I’ll never forget took place at a club by Gwinnett Place Mall… 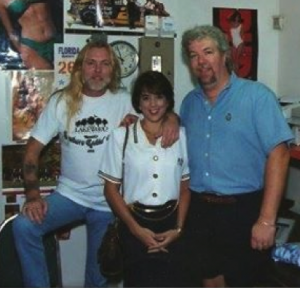 Years ago, back when tucking your shirt in was still cool, I was working a gig at Barnacles by Gwinnett Place Mall. The place was packed. The manager comes up to me and says “Rude, you have a phone call.” Barely able to hear the caller, she says she’s a friend of Gregg’s and that she and Gregg wanna come down and hang out. Of course, I thought I was being punked. Surely, Southside Steve Rickman or Beth “Chesty” Kepple had something to do with this. Until, Gregg Allman walked in…and hung out with us that night. I’ve had the pleasure of interviewing Gregg many times over the years. Always thoroughly enjoyed our conversations. Honest and down to earth. It’s times like these that you sit back and embrace the significance musicians like Gregg Allman had on your life. Gregg, R.I.P. We will never forget.

Can you remember the first time you heard the Allman Brothers Band? I was living in Burlington, North Carolina at the time. This was before there was anything close to “Rock” radio. There was barely FM! Yes, there was a time before FM. AM radio ruled the roost! A jazz station in Greensboro had a Rock Show on Friday or Saturday night from 11:30 to 1:00am called “The Progressive Experience.” I used to listen to it as a kid, every week. Loved it, it was the only place I could find the music I loved. My recollection may be a bit sketchy here cause this was a long time ago, probably around 1970ish. The host would play various cuts from that first ABB album. “Black Hearted Woman” was probably the first song I ever heard by ABB, then when “Whipping Post” came on, that was it, completely hooked! Thanks for the music Brothers! Your music will always be a huge part of the soundtrack of my life.

Remember those who gave all... 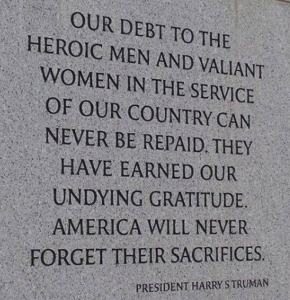 This week we also pay our respect to those who have given their lives for our country. Let’s always remember and honor them…and let’s not forget our Veterans. They should be taken care of and respected.

This was not a good week for Tiger Woods…

Diana M Moreno Jerk ! I LOVE to party like anyone else. But I won’t ever drink and drive. He can find plenty of folks to GIVE him a ride.

Steve Dycus Especially with that kind of money he could a got a limo.

Diana M Moreno Paula, I have a dear friend that’s 16 year daughter climbed in a truck with her cousin and two guys. The boys were drunk, the girls were naive and made a poor choice, all were killed 30 years ago. I’ll never forget that 3 am friend’s hysterical phone call and have no respect or use for any person that drives altered.

Bill Tush Isn’t it always the same question? Why would you do that? Lee Marvin once said, “There is nothing better than when you are just drunk enough that you know more than anybody in the place.” There is your answer, I think. 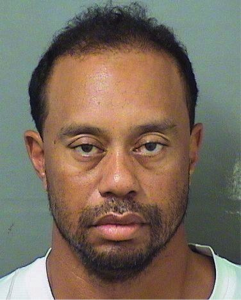 Those were some of the responses to my Facebook post. Tiger Woods popped for DUI. As it turned out Tiger wasn’t drunk he was allegedly under the influence of prescription medication. Fortunately, nobody was hurt or killed here, however, questions and concerns remain about the wellbeing of Tiger Woods? Charles Barkley told 97.5 The Fanatic that people need to stop jumping to conclusions. “Even Jack Nicklaus, somebody I really respect, said, Well Tiger needs help. He don’t know that.” “We don’t know if Tiger has a drug problem. Stephen A. said he’s a lost soul. We don’t know that. He just had a bad reaction. He wasn’t out there drinking and driving.

I hope Charles is right. A “bad reaction” that lead to a bad decision to get behind the wheel of an automobile. Only Tiger and those people close to him know if he has a drug problem, or not. In my opinion, if Tiger Woods is driving an automobile in that kind of condition, he has a problem and so do we! Read Diana M Moreno’s heartbreaking, cautionary tale (Facebook post) Fortunately, the police got this guy off the road before anybody was killed. As far as a drug problem? That remains to be seen. I don’t want to see Tiger go out like Prince.

On a lighter note,

Looks like the Bro-Romper is already getting some competition from the Men’s Lacey Short. It’s been a slow year for Men in the fashion statement department… 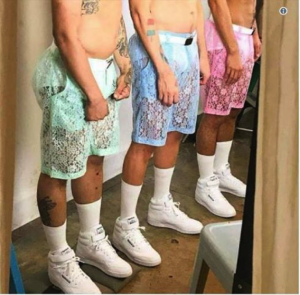 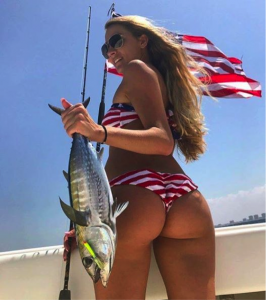