Tuesday evening, the Braves stole the headlines as John Hart announced that top prospect Dansby Swanson would be promoted to Atlanta and in the starting lineup on Wednesday. Swanson has split the season between High-A Carolina and Double-A Mississippi and was informed of the news around 7pm ET. In 105 games this season, Swanson has combined to hit .275 with 25 doubles, 5 triples and 9 homers. More importantly, he’s gotten a chance to re 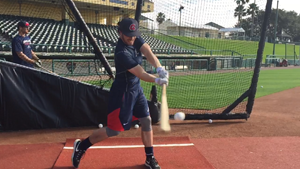 main at shortstop, playing alongside Ozzie Albies who made the switch over to second base.

Swanson, a native of Marietta, was selected first overall in the 2015 MLB Draft by Arizona out of Vanderbilt University. Just six months later, Swanson was acquired along with Ender Inciarte and Aaron Blair in exchange for Shelby Miller and minor leaguer Gabe Speier. This past July, he represented the Braves in MLB’s Futures Game in San Diego at the All-Star Game.

“We feel that this opens an opportunity for Dansby Swanson and we’re going to bring him tomorrow” John Hart announced on Tuesday. “We don’t expect him to come up here and be the savior but we feel that this is an opportunity for us to take a good look, get him some experience up here in the Big Leagues. He’s being told now that we’re going to ma
ke a spot for him tomorrow” Hart added. While Swanson makes the jump to the Majors, Ozzie Albies will remain with Mississippi for the time being. Albies could still get the call once rosters expand on September 1st, but nothing is set in stone as of now.