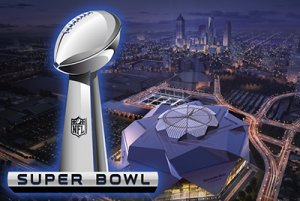 Well, it looks like Arthur Blank got his Super Bowl! Let’s hope he wants his team to win a Super Bowl as much as he wanted one in the city of Atlanta, which I’m sure he does! They did everything necessary to get this thing here, they were on hard knocks (brutal) they played in London( rough game vs Detroit) and they built a billion-dollar stadium, seat licenses and all. We can only hope the weather holds up because the last time they had a Super Bowl in Atlanta,  it didn’t go so well, ice storm! I do think this is a great thing for the city of Atlanta and for the people here to enjoy.

I’ve never been to Super Bowl game as a player or to watch, and I don’t know that I don’t change and 2019 when it comes to Atlanta. I will however enjoy the scene, the nightlife, the NFL Players parties and the congregation of past teammates and friends. It will be a special couple weeks and hopefully everything goes according to plan. Working in the media with 680 the fan will allow me access to a ton of interviews, media row, and the game itself if I so desire, so those will be some nice perks for me. All in all it’s a win for Mr. Blank and for me! I’m looking forward to it!